A member of Class Fifth, Ryid's most notable attribute is his enormous size. He has a strong body as his mother was a Lorican. According to the Rubicus, Ryid is 25 years old and 7'2" feet tall. In battle, he wields a large arm mounted mechanized piling rampart that can fiercely eject its main blade for increased damage.

A man of few words, Ryid diligently trains with his enormous lance every day--not for his own benefit, but for the sake of protecting other people. This gentle giant is firm in his convictions, and he would gladly give his own life to save others. He inherited his mother's sizeable stature, and her Lorican blood runs thick through his veins.

Ryid trains hard every day to use his strength to protect others. He is calm and composed and not easily angered, and is used to people outside Lorica being impressed by his height. Despite the loss of his motherland to the Militesi Empire, Ryid doesn't harbor revenge.

Ryid attends the Akademeia in hopes of using his strength to protect others around him. During their first encounter with him, Cinque and Trey comment on his massive size, which he does not mind. He explains his size is due to his Lorican blood. Cinque points out that Lorica was annihilated by Milites, and Trey says they will avenge the fallen. Ryid is uninterested in revenge, impressing Cinque with his demeanor.

After Class Zero is blamed for Queen Andoria's assassination, Ryid remains positive the cadets are innocent despite the aggressive rumor mill. He is unhappy of the way the Consortium of Eight is handling the incident by distancing themselves from the class, as Ryid believes that during troubled times people must protect their own. He implores the cadets to ignore the rumors and trust in their friends, saying he believes in them.

Because of his half-Lorican ancestry, the Vermilion Bird Crystal no longer grants Ryid the ability to use magic when he reaches a certain age. Thus he is required to leave Akademeia and given a post outside the war effort. When he expresses his desire to continue protecting people as best he can, Trey suggests that instead of fighting, he can help others by training candidates at Akademeia and passing on his skills. Accepting this new outlook, Ryid joins Class Zero as an ally.

When Tempus Finis commences Ryid is not ready to give up, saying he has already lost one home and has no intention of losing another. He doesn't fight for revenge, but for those who stand beside him in defiance.

Ryid's profile in the Rubicus suggests that he is the grandson of the chief advisor to the King of Lorica.

Ryid is playable in Final Fantasy Awakening where he wields a massive bladed rifle similar to a harpoon. He swings it in a close range as both of his special skills can cause small quakes and tremors when he slams his rifle into the ground. Due to his Lorican blood, his strongest skill is to transform into a Crimson Demon Knight similar to Gilgamesh and Enkidu, which augments his close range skills.

The Final Fantasy Type-0 Kōshiki Settei Shiryōshū Aku no Hishi art book contains concept artwork for a weapon for Ryid, suggesting there were plans for him to appear in a battle. He would have wielded blades mounted on his arm.

In the English version, Ryid is voiced by Travis Willingham, who also voiced Volg from Final Fantasy Fables: Chocobo's Dungeon. 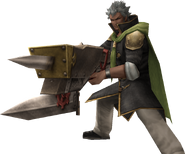 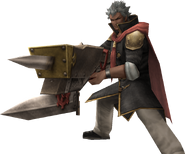 Ryid in his Class Fifth uniform.

Ryid in his Class Zero uniform.

Ryid in the Type-0 manga.

Uruk is the name of Gilgamesh's kingdom from the Epic of Gilgamesh. Terms from the epic are commonly used as Lorican names in Final Fantasy Type-0.