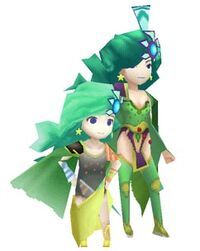 "Rydia" is played when the character first joins the party, and is also heard when she melts the flames on Mt. Hobs and when she returns as an adult in the Dwarven Castle. It was released as the fifteenth track of the Original Sound Version and Music from Final Fantasy Chronicles albums.

"Rydia" was rearranged by Junya Nakano for the 3D release, and is given the same use in-game as in the original releases. When unlocked in the Fat Chocobo's Music Box, Edward Chris von Muir comments that it captures "her kind and gentle nature". This version was released as the sixteenth track of the original soundtrack.

"Rydia" is heard during Rydia's chapter, "The Eidolons Shackled".

An arrangement of "Rydia" by Yuzo Takahashi is used, called "Ranch at Night". It was released as the fifth track of the original soundtrack.

"Rydia" is one of the thirteen tracks selected from the original soundtrack to be rearranged and performed by Reiko Nomura for the album.

"Rydia" is rearranged in performed in the style of Irish Celtic music.

The track appears in the SQ Chips2 VILLAGE/VANGUARD Customer Bonus and SQ Chips2 TOWER RECORDS Customer Bonus CDs of the 8-bit arrangement album. It is the second track in both the bonus CDs.

A Christmas arrangement of the theme appears on this album.

The arrangement of "Rydia" by Reiko Nomura from the Final Fantasy IV Piano Collections release was included in this album of remixes of themes from Final Fantasy titles up to the sixth main installment. "Rydia" is the sixteenth track of the album.