The representative Summoner from Final Fantasy IV, Rydia is one of the most prominent Summoners in the series's history. She has made more than a dozen appearances in anthologies, compilations, crossovers, and non-canon works.

A downloadable outfit, the "Mystic" costume, can change the main character Mira's appearance to Rydia's design from Final Fantasy IV: The After Years.

Rydia appears as an obtainable summon. She can be obtained as a summon through the summon drawing shop. Three alternate variants, Rydia RE, Rydia OR and Rydia (God), also appear as summons. 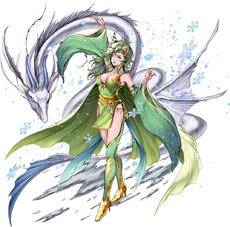 Rydia appears as a non-elemental summon. She is a limited edition cameo summon as part of the "Summoner Rydia" event.

Three versions of Rydia's Phantom Stone are available to players, Rydia, Rydia RE, and Rydia OR. All Rydia Phantom Stones share the special attack, "Mist Dragon", which distributes the user's HP to the entire party. Summoning any of the Rydia summons costs 2 points from the Consumption Gauge.

Rydia allows the user to use the following abilities:

Rydia's Phantom Stone (Rank 7).
Add a photo to this gallery

Rydia RE allows the user to use the following abilities:

Rydia OR allows the user to use the following abilities:

Costume.
Add a photo to this gallery

Rydia makes a cameo in her child form as a tutor for the in-game manuals. She exchanges information on Summoning and Summonstones with Edward.

Rydia appears as a tutor for the in-game manuals. As she did in Dissidia Final Fantasy, she explains Summoning and Summonstones, this time using her adult portrait and sharing her role with Edge.

Rydia appears as a playable character.

A young girl from the summoner's village Mist. Emotionally scarred by the burning of her village, a ruthless massacre ordered by the king of Baron, she initially hates Cecil for robbing her of her home and her mother. But his gentle ways break through her shell and despite the complicated feelings he inspires in her, she will travel with the Dark Knight until she is swallowed by the summoned Leviathan.

Rydia appears as an unlockable character, obtained by collecting Green Crystal Shards. Her appearance is her child form based on her Yoshitaka Amano art.

Rydia's is a powerful summoner with strong black magic. Additionally, she has several support abilities to recover the party's health, increase magic and also her own Agility. Overall, she's a solid magic character with great support abilities.

The last summoner of Mist, the one place on Earth closest to the Eidolons. Despite her sorrowful past, she lives on in courage and fights alongside Cecil, the dark knight who brought about her mother's death...

Rydia returns as an unlockable character, and is now obtained by collecting Peach Crystal Shards. Despite appearing as a child, Rydia's size has not been adjusted, and she stands at the same level as almost all other characters, unlike Shantotto.

Rydia remains a strong mage with a plethora of spells at her disposal, and although she loses several support skills, she also gains more magic to utilize and the ability to boost her Luck, making her useful for obtaining treasures on both field and battle.

Rydia is a playable character, and is available to select from the beginning.

Rydia's sprite.
Add a photo to this gallery

Rydia appears as a summonable Legend. She is depicted in her default Final Fantasy IV child and adult outfits. Her abilities are Chocobo Kick and Radiant Breath.

Meteor (GR).
Add a photo to this gallery

Meteor (UUR+).
Add a photo to this gallery

This gallery is incomplete and requires Radiant Breath (Summon) added. You can help the Final Fantasy Wiki by uploading images.

Rydia appears as an obtainable card.

This young summoner from Mist has a good, sweet heart, but hates cowardly adults.

Rydia is an exclusive character only available from the Premium Character Shop as a random downloadable content, she summons the Mist Dragon during battle.

Rydia joins the player party as a child. A standard character, Rydia is recruited as the First Time Reward for completing the Record of Fabul in the Realm of Final Fantasy IV on the Classic difficulty track. She has also appeared in The Burning Blade and Twin Stars of Mysidia, where in both events she is also easier to acquire. She can grow into her adult self with the Chosen of Feymarch Wardrobe Record, obtained during A Summoner Grown.

Rydia appears as a vision and optional playable character. She has two variants: the 3-5★ "Rydia" (リディア, Ridia?), and a child version, the 5-7★ "Pure Summoner Rydia" (無垢なる召喚士リディア, Mukunaru Shōkanshi Ridia?, lit. Innocent Summoner Rydia). Both are Rare Summons, their job is listed as Summoner and their role is Magic Damage. More specifically, in both variants, Rydia is able to achieve increased damage from esper evocations, being useful as a "finisher" in chains. However, their stats and skillsets differ (with Pure Summoner Rydia being a vast improvement over the original) as do their Trust Master rewards. 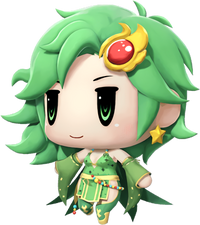 Notes: Summoner / Researching the Crimson Prophecy / Looks up to Yuna as a role model

Bad Memories
Rydia has a paralyzing fear of fire, brought on by the trauma she experienced when a calamity befell her home village of Mist. She lost her family that day, and even now sees the inferno that consumed them in every spark or flicker of flame. And try as she might, she has yet to overcome her phobia.

Growing Up
The original Rydia from FINAL FANTASY IV underwent a rather unique aging process during her time in the Feymarch, but here in Grymoire she has grown up at the same pace as any other girl. As a result, she's a little bit more down-to-earth than you might remember.

Rydia's mother was also a summoner, which makes the two of them a rarity in Grymoire, where Lilikin do not generally pass on such powers to their children.

Fighting Fire
Since meeting Reynn and Lann, Rydia has made great progress in overcoming her fear of flames. She's still got a ways to go, but the healing has already begun.

Her Mother's Familiar
When a familiar loses the summoner that brought them to a world, it also loses the source of magic that allows it to linger there. Once the magic their summoner invested in them finally fades, they must return whence they came.

However, some masterless familiars prove to be powerful, resourceful, and intelligent creatures. They secure sources of magic that allow them to remain in the world long after their summoners have died. The mist dragon Rydia's mother summoned is one such Mirage.

Prismarium Prison Breaks
Among the Mirages that Reynn and Lann capture, some—like the seven known as the Pleiad—are powerful enough to secure their own magical sources, leave the confines of their prismariums, and wander about the world at will, even while their souls remain beholden. (If they are called upon, they are forcibly teleported back.)

However, this is only possible if the prismarium's master is not paying attention. To put it simply, picture a heavy door in every prismarium that leads to the world outside. If the Mirage is strong enough and no one's watching, it can push the door open and head along on its merry way. However, if the door is kept under lock and key, then no matter of pushing can force it open.

Long ago, Lann and Reynn captured a great number of Mirages, but left the doors to virtually all of their prismariums wide open and unguarded. Because of this, many Mirages—the Pleiad in particular—rampaged across Grymoire and made trouble for everyone. And Lann and Reynn, as the cause of this sorry state of affairs, became known as the Demon Dyad.

The following is a list of quotes uttered by Rydia when talking to her.

I hope that one day I'll be as strong as Lady Yuna.

Rydia appears on a few cards. Two cards feature both of her SD images, while the other depicts her DS CG render. Another card features her tale's promotional artwork from The After Years.

Trading card of the promotional artwork for Rydia's Tale.

Rydia.
Add a photo to this gallery

Rydia appears as a card and summonable creature in Lord of Vermilion II, along with other characters from Final Fantasy IV as part of a special cross promotion. Her card is Super Rare, and has an Attack and Defense of 35. Rydia's special ability is Hastega. An update of her card reappears in Lord of Vermilion Re:2, the second version of the game. In addition to this, a limited edition of Rydia as a child is also available.

Summoner Rydia.
Add a photo to this gallery