Spell-weaving airborne lizards found in the Sector 5 slums. Inquisitive by nature, they cannot resist collecting shiny objects such as jewelry.

Rust Drake is an enemy in Final Fantasy VII Remake found in the Sector 5 Slums following the collapse of the Sector 7 plate, as part of the odd job "Chocobo Search" in Chapter 14 - "In Search of Hope". It can also be fought in the Shinra Combat Simulator as part of the "High Flyers" challenge. It can be quite tough of an opponent if the player is not prepared for it, as it flies while also absorbing magic attacks, further limiting the player's options in fighting it.

While enveloped in darkness, they absorb all spells. However, inflicting a certain amount of damage while they cast Gravity will dispel the darkness and make them susceptible to staggering for a short while.

Rust drake is enveloped in a dark aura that makes it impervious to status-inflicting spells and offensive magic for a vast majority of the battle. Once it attempts to cast Gravity on the party, it will hover closer to ground to charge the attack for 10 seconds. If the rust drake sustains damage equivalent to 25% of its maximum HP during this time, the casting of Gravity will be interrupted and its dark aura will be dispelled. If the drake succeeds in casting the spell, it will reduce the HP of any party member within range of this attack to 1.

The rust drake is weak to

Wind, but resists magic attacks while protected by the dark aura.

When the rust drake is charging its Gravity attack, the player should work fast to attack and interrupt it. Tifa can launch a Starshower followed up by a Divekick combo, as the Starshower's buff will greatly strengthen Tifa's next ability. Simultaneously, Barret can launch Maximum Fury and Overcharge while Cloud charges up ATB with regular melee attacks.

Dispelling the rust drake's dark aura makes it vulnerable to magic spells, including status debuffs and offensive magic. Cloud can then cast

Aeroga for massive magic attack damage. If Cloud has enough ATB to spare, he can likewise cast offensive magic to help deal the final blow to the drake.

As the drake hovers out of reach a lot of the time, Barret can be used as the main attacker with a ranged weapon, and be equipped with

Healing Materia helps for fast recovery in case the drake will manage to pull of Gravity. The player can also cast

Regen with this set-up. Cloud is the party's best magic-user at this point, but with Regen the user's

Magic does not matter. 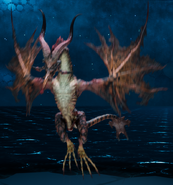