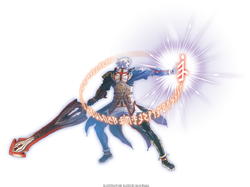 The rune fencer is a job capable of controlling the ebb and flow of battle through the use of offensive and defensive runes inscribed upon their flesh to bolster their combat capabilities. Just as with paladin and ninja, they excel in keeping their comrades safe, particularly with respect to magical damage from the elements. They are also practitioners of divine and enhancing spells, enabling them to be prepared for any engagement.

Rune Fencer (魔導剣士, Madō Kenshi?, lit. Sorcery Fencer) is one of the jobs released in the Final Fantasy XI: Seekers of Adoulin expansion.

Rune Fencer is the third "tank"-type job, and the first job to specialize in the use of the greatsword. Rune Fencers are intended to use their damage-dealing capabilities to help draw the foe's attention and use their spells and special job abilities to mitigate magic damage.

Rune Fencer's magical attacks and defenses have a strong elemental aspect, determined by which runes they are "harboring" at the time. Built-up harbored runes provide elemental attack and defense, and furthermore can be expended for various effects.

The quest to become a Rune Fencer is undertaken at Eastern Adoulin. The player must speak with Octavien to begin the quest "Children of the Rune". They then must acquire a Yahse wildflower petal to draw the runes on their body, and repeatedly attempt to use the rune enhancement until they succeed.

Blue Mage sub is the best defensive sub job. Players can access the potent Cocoon spell which buffs defense by 50% in addition to a bevy of enmity generating spells (including AoE) and niche traits such as Resist Sleep and some basic Killer effects. Use it on anything if expecting to take a lot of physical damage and shadows will either be a waste of time or ineffective.

Ninja is the second best option for tanking. If the player is fighting something with a lot of powerful single target attacks, consider subbing Ninja. Rune Fencer can cap both the recast and casting time reduction on Utsusemi fairly effortlessly, allowing one to basically chaincast shadows as necessary.

While Warrior is not the best for Rune Fencer, it has its uses. Defender doesn't come close to Cocoon or Utsusemi and Provoke is better on Paladin because it has some nice enmity manipulating abilities. However, since Provoke isn't affected by Silence and Defender can't be overwritten by Defense Down, Warrior sub can be used on fights when both effects are issues. On the DD side, Berserk, Warcry, Aggressor and Double Attack don't overcome the benefits of Smite and Last Resort for damage dealing purposes, but they can be useful nevertheless.

Due to the recent addition and buffs to Smite, subbing Dark Knight has never been a better choice. In addition to a staggering passive bonus of 14.8% attack, players also gain access to Last Resort, Weapon Bash, and a new powerful hate accruing spell on Stun. Poisonga is also a nice tool for AoE pulling.

Samurai is a sort of Hybrid subjob. It won't always be worth more damage to sub Samurai over Dark Knight (unless planning on capping attack, in which case Samurai is the best choice), however Samurai sub offers some extra utility that Dark Knight sub cannot. Seigan and Third Eye make a great emergency defense combo, and Zanshin is nice if one happens to fall under the hit rate cap.

The spells that the player gains access to—most notably status removal, cures, and Haste—make White Mage a very strong candidate for when the player is solo or in a very low man situation. Being able to heal, remove a bad status ailment, and cast haste more than makes up for the loss of offensive power by switching from Samurai when battling a powerful enemy. 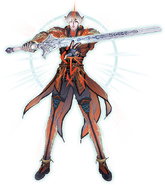