Rune Bow (ルーンの弓, Rūn no Yumi?), also known as Rune, Magic Bow, or Mafuuji, is a recurring bow in the series.

Rune Bow is a mid-ranked bow that provides 42 Attack (25 on the NES) and +2 Intellect/Mind, and can be equipped by the Onion Knight and Ranger. It can be found in Castle Hein.

Rune Bow is the weakest bow providing 100 hit rate, and a 33% chance to inflict Silence on hit. It can be dropped from Gilgamesh at the entrance of the Interdimensional Rift or bought for 10,000 gil at Phantom Village.

Rune Bow is an archery weapon that provides 38 damage, 360 delay, with a latent Ranged Accuracy +5 and Enmity -2 effect. Its latent effect is active while weapon is drawn and MP > 0 and drains 4 MP per tick. It deals 6.33 damage per second and accumulates 93 TP per hit. It can be equipped by level 73 Warrior, Black Mage, Red Mage, Thief, Paladin, Dark Knight, Beastmaster, Bard, Ranger, Samurai, Ninja, Summoner, Blue Mage, and Scholar. It can be found in Strange Apparatus in Gusgen Mines (J-5) Map 2, Crawlers' Nest (K-8) Map 3, and Ordelle's Caves (E-12) Map 1.

Rune Bow is a weapon for Trey. It provides 47 Attack Power and found as a random treasure in Bethnel Caverns. It sells for 2700 gil.

A bow decorated with ancient engravings that hold mystical power. The carvings upon it are said to have been made by a civilization that lived long ago, and are believed to be what makes this weapon more powerful than the average bow. Its string never snaps or loses its tension either, making it a valuable weapon that others hope to imitate in order to make a profit. Fortunately, a forgery can be easily spotted by simply testing the limits of the bow's string.

Rune Bow is a bow that provides 48 ATK, +50% physical damage against birds, +70% accuracy, has a damage range of 125-175%, and requires both hands to wield. It can be found in Underworld Gaberada and Estavilla. 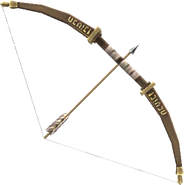 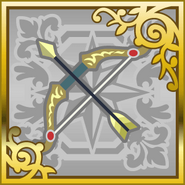 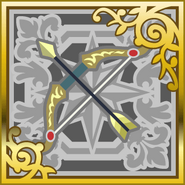 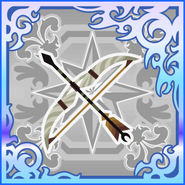 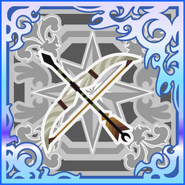