This axe enhances magical power. But that doesn't really help anyone, does it?

The Rune Axe (ルーンアクス, Rūnakusu?) is a recurring weapon in the Final Fantasy series. It variably enhances the user's magic abilities or is effective against enemy magic users, and is often one of the most powerful axe-type weapons.

The Rune Axe drops from the Prototype and is found in the Whisperwind Cove. It has 40 power, increases Magic by 3, and casts Curaga when used as an item. When the user attacks, the Rune Axe consumes 25 MP to deal an automatic critical hit if the user has at least 25 MP.

The Rune Axe is found in the Jade Passage and drops from Generals. It has 95 power, deals extra damage to enemy Mages, and casts Fog when used as an item. It is the strongest generic axe-type weapon, as the strongest axe, the Gigantaxe, is only usable by Guy.

The Rune Axe can be bought aboard the Invincible and is usable by the Onion Knight, Warrior and Viking classes. It has 110 power and increases Mind and Intellect by 2.

The Rune Axe is a two-handed weapon that drops from the Armor Construct, Armored Fiend, and Iron Giant. It has 100 power, deals extra damage to enemy magic users, and is usable by Cecil, Kain and Cid. In all but the GBA and PSP versions, it is the strongest axe-type weapon. This weapon is metallic.

In the Easy Type version, it was renamed Magic Sealing Axe. Its attack power was increased to 120 and hit rate to 40% and is now throwable.

In the 3D versions, Rune Axe has an attack power of 110 with an accuracy of 90 with the same properties as the 2D versions. It provides +8 Strength and Stamina, -5 Speed, Intellect, and Spirit and deals extra damage against mages.

The Rune Axe provides 100 Attack, 10% Accuracy, and is effective against mages. It drops from Armor Construct and Armored Fiend. It can be equipped by Cecil, Kain, Cid, Luca, Gekkou, and Golbez.

The Rune Axe is the axe-type sealed weapon. It has 68 power and increases Magic by 3. It consumes 5 MP for a critical attack with 10 more Attack Power and adds Magic stat to the damage formula. As with all axes, it is usable by the Freelancer, Berserker and Gladiator classes.

Rune Axe is an axe that provides 45 damage, 276 delay, with a latent Attack +5 and Regen effect. Its latent effect is active while weapon is drawn and MP > 0 and drains 3 MP per tick. The latent Regen effect is 5 HP per tick, and stacks with Regen magic. It deals 9.78 damage per second and accumulates 73 TP per hit. It can be equipped by level 70 Warrior, Black Mage, Dark Knight, Beastmaster, Bard, Ranger, Summoner, Scholar, and Rune Fencer.

The Rune Ax is a mid-level weapon used by any race. It provides 48 attack power, and can be created from a White Silver, Silver x3, and Elemental Gem x3. When turned into a jewel, levels 3-9 will grant a Time Stone 1, levels 10-19 will grant a Crimsonite, and levels 20-30 will grant a Tiny Diamond de Luz.

Rune has a axe icon and is thus the second-strongest axe-type weapon. It can be found in Valhalla Palace. It has 40 uses and it increases a Robot's HP by 45. It reflects magic when used that round for one round.

Rune has an axe icon and is the second-strongest axe with an attack power of 100. It can be bought for 13000 G at Knaya in Pureland and Masa aboard the Talon.

This axe enhances magical power. But that doesn't really help anyone, does it?

Rune Axe grants +15 to Attack and can be equipped by Berserker and Viking. The Berserker wields the Final Fantasy V version of the Rune Axe when attacking.

An axe engraved with runes that increase magic.

An axe engraved with ancient writings. It is said to increase the ability to focus for its bearer. There are currently still scholars who study and understand these writings. However, it has been found that simply writing these characters produces no effect. Nowadays, only a tiny portion of shaman are capable of engraving these words to the same effect, making this axe incredibly rare.

Rune Axe is an Axe obtained by finding it at Ghost Ship and Magi Nation Mysidia. It provides 53 ATK and 12 SPR. 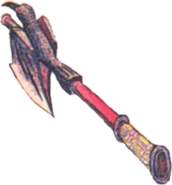 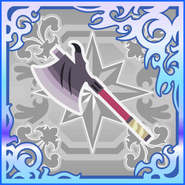 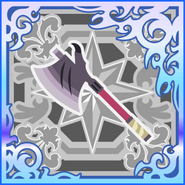