A mysterious bracelet that heightens MP. The ancient writing inscribed on its inner surface draw out its wearer's potential, awakening their hidden powers. Though there is a book which explains these inscriptions, simply copying them has little effect. Since a ritual is necessary in drawing out the true power of the words, very few of these precious items have been made.

Rune Armlet (ルーンの腕輪, Rūn no Udewa?, lit. Rune Bracelet), also known as Rune Bangle, Rune Ring, Magic Bracelet, and Rune Bracer, is a recurring armor and accessory in the series. It is often a mid-ranked piece of equipment, granting resistance to Silence or boosting the user's max MP.

In the 3D versions, Rune Armlet provides +10 Evasion in addition to all the other bonuses, but no longer reduces damage done by mages. It can be acquired and equipped as previously, although adult Rydia now comes equipped with one.

Rune Armlet provides 5 Defense, 8 Magic Defense, 8 Magic Evasion, +3 Intelligence, +3 Spirit and resists Silence and Mages. It is initially equipped on Rosa, Palom, and Porom, bought for 2,000 gil at Damcyan and Fabul, and drops from Marionetteer. It can be equipped by Rosa, Palom, Porom, Yang, Monk A, Monk B, Rydia?, and Edge.

Rune Armlet is a mid-ranked armor that provides 43 Defense, 5 Def%, 24 Magic Defense, and four single Materia slots with double growth. It can be bought for 3,700 gil at Bone Village. It has the most Materia slots of all double AP growth armor, and it is tied with two other kinds of armor for the most total AP gained in each battle. Consequently, Rune Armlets are often considered the best armor for gaining AP and leveling up Materia.

Rune Armlet is an accessory that provides MP +80% and prevents Silence, and when two are used in Materia Fusion, it gives MP +10%. It can be bought from Gongaga Trading for 8,000 gil.

Rune Amulet is an armor that provides 16

Magic Defense and has three materia slots, two of them linked. It is the prize for completing the "Tifa vs SOLDIER Trainees" battle challenge in the Shinra Combat Simulator. It can be purchased at the item shop in the same areas as the Combat simulator for 6400 gil, and in vending machines later on.

Rune Armlet is an item that teaches a GF the Spr+20% ability. It can drop from a level 20-100 Blobra or any leveled Righty. It can be mugged from any leveled Blobra or a level 30+ Righty, and can be found through Angelo Search at a 2/288 chance. It can also be modified from Blobra card x4 for a Rune Armlet, and can be refined into Shell Stone x10 or Shell spell x40.

Rune Bracer is an accessory that provides Max MP +100%, and consuming one will raise a creature's Max HP. It can be found at Macalania Woods (chapter 5) and the Calm Lands Ruins, dropped from Ultima Weapon (normal and Oversoul), stolen from Black Elemental (normal and Oversoul), bribed from Flan Blanco (2,500 gil - x1), by dispatching a level 4 chocobo to Mi'ihen Highroad and as a random prize for winning the Aeon Cup.

Rune Armlet is an accessory for Penelo, which increases the duration of her dances. It can be obtained from completing Final Mission 73.

Rune Armlet is an accessory that provides +50 MP and 3 DEF. It can be bought for 40 Star Quartz from the Fat Chocobo at Town of Kolts. 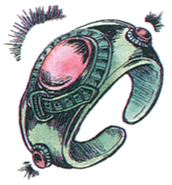