Rukh is a water-elemental Eidolon that exclusively appears in Final Fantasy Dimensions II. He is one of Jornee's default summons, being the strongest out of the starting set. His signet provides her with a decent HP, attack, and magic stat boost.

The signet's Blizzara abilities are Jornee's only means of inflicting group damage when she initially joins the party. Once the signet is upgraded to rank II and accumulates the required AP, Blizzara II is the best means for Jornee to inflict water-elemental damage to all enemies until she can obtain the Aqua Witch's signet from Babil Tower in Chapter 6-1 of the "Crystal of Time" arc.

The description from the Japanese free-to-play versions describe Rukh as the God of Water in the world of Final Fantasy Dimensions II. Despite being named after the recurring avian enemy, Rukh's Japanese name is Rudra, borrowing his name from the Hindu deity of the same name who is often associated with the Shiva deity. Rukh functions as a male parallel to the Shiva Eidolon, a connection that is lost in the localization of the game.

Rukh's artworks depict him as a young man who can manipulate ice to his liking, surrounding himself with icicles and riding a wave of ice. He has pale blue skin and short light-blue hair. He is bare chested, only wearing a pair of shorts, shin guards, and assorted jewelry throughout his body. His final artwork depicts him in a more elaborated variant of his outfit and wields a sword made of ice. Lastly, the wave of ice he rides increases in size.

The following are the abilities Jornee can learn from Rukh:

In the original free-to-play versions, Rukh was released during the game's time as Final Fantasy Legends: Toki no Suishō. His signet could only be obtained from the game's summon draw shop. Rukh's signet taught the Absolute Zero I-III abilities instead, which dealt water-elemental damage and inflicted stop.Both his player abilities and summon attacks had the anti-plant and anti-aquatic traits, making them useful during summer events. Due to the event enemies being removed in the premium version, the anti-type effects were removed from the Ice Age attack. He was an SS rank signet and could be equipped by all party members. 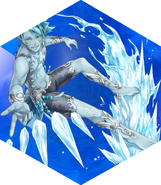 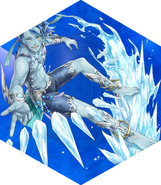 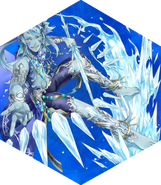 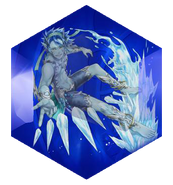 [view · edit · purge]A roc or ruk (from the Arabic and Persian رخ rokh, asserted by Louis Charles Casartelli to be an abbreviated form of Persian simurgh) is an enormous legendary bird of prey, often said to be white.

[view · edit · purge]Rudra is a Rigvedic deity, associated with wind or storm, and the hunt. The name has been translated as "the roarer". In the Rigveda, Rudra has been praised as the "mightiest of the mighty".