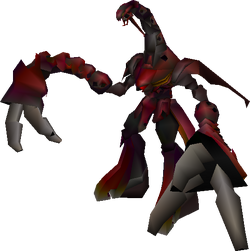 Ruby Weapon (ルビーウェポン, Rubī Wepon?) is a recurring enemy in the Final Fantasy series. Originally appearing as a superboss in Final Fantasy VII, it has since made cameos in other installments as well. It is one of the Weapon creatures created by the planet as its defense mechanism.

Ruby Weapon and Emerald Weapon are two superbosses first introduced in the North American release, and later appearing in all subsequent versions. Ruby Weapon is fought in the desert near Corel Prison. It is invincible until it exposes its tentacles, and it will only do this if there is only one party member alive; if there is more than one party member alive and its tentacles are not exposed, Ruby will remove characters from battle until only one party member remains. Defeating it earns the Desert Rose item, which can be traded for a gold Chocobo with the Kalm traveler.

In Final Fantasy VII Remake during the sidequest called "Corneo's Secret Stash" where Cloud and his party are tasked with finding Don Corneo treasury, one of them is the "Ruby Tiara"

, which is shaped after Ruby Weapon.

Ruby Weapon is a Garlean warmachina introduced in Patch 5.2 in the trial Cinder Drift, developed by the reformed VIIth Imperial Legion from reverse engineering the Ultima Weapon and incorporating the data of their deceased leader Nael van Darnus into its mainframe. When the onboard AI speaks it uniquely uses a text box modeled after the one used in Final Fantasy VII. 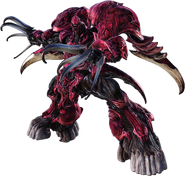 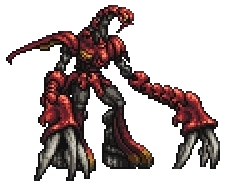 The Weapon monsters in the Final Fantasy VII series are named after gemstone. [view · edit · purge]A ruby is a pink to blood-red colored gemstone, a variety of the mineral corundum (aluminium oxide). It is the birthstone for July.