This cowgirl's wilder than a buckin' bronco!

Ruby is a minor character in Final Fantasy IX. She is an actress in Tantalus Theater Troupe and is the only female of the group. She plays the lead heroine in Tantalus's production of the famous play I Want to Be Your Canary. 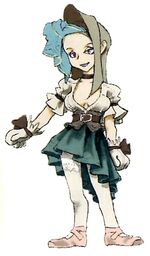 Ruby wears a low-cut white blouse with short sleeves. Her hourglass figure is cinched in by a brown corset-like belt. Short green panels grace the sides of her teal, asymmetrical skirt. She wears opaque white tights, pink shoes, short white gloves with brown ribbons, and a brown choker. Her hair is gray, but much of it is covered by a large, light blue bandana.

When left behind by the rest of the troupe, Ruby shows off her entrepreneurial nature by founding a mini theater. The other Tantalus members fear her scolding and work behind her back to escape her temper. Still, the Tantalus members begin their adventure while cheerfully leaving Ruby behind, briefly forgetting all about her. She would personally be happier if the troupe would just be actors and not thieves, but she still does her best to cheer up anyone who needs it.

Ruby was going to play the role of Cornelia in Tantalus's production of the play I Want to be Your Canary, but she had the part unintentionally stolen from her by Princess Garnet. During Tantalus's escape from Alexandria, Ruby gets left behind. She starts up her own theater and remains there, even after the rest of Tantalus return to Lindblum. Ruby hires the famous actor Lowell Bridges but he feels his talents are wasted in Ruby's small theater and continually complains about everything. Ruby is the owner of Superslick, an item required to fix Mognet Central.

Even after founding her own theater in Alexandria, Ruby reunites with Tantalus for their final performance of I Want to be Your Canary, now able to reprise her role as Cornelia.
Spoilers end here.

Ruby has the Superslick key item needed to fix the Mognet Central, but she will only give it to the player after they are finished delivering a chain of letters between moogles in the endgame. The player will need to visit Alexandria and talk to Kupo in the steeple to start the quest.

In the Advance and successive remakes of the original Final Fantasy, Ruby is one of the automatic names the player can choose for the White Mage job.

The Tantalus theater troupe was primarily designed by the art director, Hideo Minaba. During development there was talk of Ruby being an oyama (a male actor who plays female roles in Japanese Kabuki theater).[1]

During one of the opening cutscenes, if the player chooses Queen Brahne 64 times when Baku asks Zidane who they are meant to kidnap, Ruby will storm into the room and move the conversation onwards.

Ruby with rest of Tantalus in a Yoshitaka Amano artwork.

Closeup of Ruby from the previous artwork.

[view · edit · purge]A ruby is a pink to blood-red colored gemstone, a variety of the mineral corundum (aluminium oxide). It is the birthstone for July. Ruby is called Carmen in the Italian version.