-Abilities whose names are not shown when used are highlighted in italics.
-They don't appear at first and Ruby Weapon cannot use certain attacks when they are out. Their attacks count as attacks from Ruby Weapon and do not own their own attacks.
-The party cannot escape.

The attacks of the tentacles are controlled by Ruby Weapon, so attacks from them are counted as Ruby Weapon's. Despite never actually getting a turn, the Tentacles have a Dexterity stat of 253, the highest in the game (shared with the main Ruby Weapon's body). When Ruby Weapon has a tentacle out, it cannot use certain attacks because its arms are occupied.

As the player cannot target Ruby Weapon and its tentacles at the same time, they cannot be taken out at simultaneously. Ruby Weapon can summon forth the tentacles infinitely throughout the battle, even if they have been destroyed. They are not as big of a threat as Ruby itself, and the player should concentrate his or her efforts on the Weapon, as the battle ends when it's destroyed. 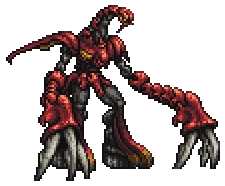 Retrieved from "https://finalfantasy.fandom.com/wiki/Ruby%27s_Tentacle?oldid=3239386"
Community content is available under CC-BY-SA unless otherwise noted.