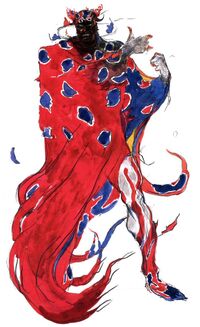 Leader of Golbez's elemental archfiends, dubbed the Autarch of Flame.

Rubicante (ルビカンテ, Rubikante?), also known as Rubicant, is a recurring character in the Final Fantasy universe. First appearing in Final Fantasy IV as a minor antagonist, he is one of the four archfiends associated with the elements; in this case, fire. Despite his role as an antagonist, he has a strong sense of honor and fair play, unlike the other archfiends, as he heals the party before each encounter with him. However, this is a way of Rubicante establishing his ego and might over the other archfiends, and to impose his power upon his foes.

Rubicante appears in the Dawn of Souls and 20th Anniversary remakes as a boss at the last floor Hellfire Chasm, one of the bonus dungeons for the remakes. Defeating him will take the player off the dungeon, and he drops a Kikuichimonji.

I respect men like you. Men with... courage. But you are a slave to your emotions, and so will never know true strength. Such is the curse of men.

Rubicante is a boss and one of Golbez's Archfiends, and is the Element Lord of Fire, titled the Autarch of Flame. He is considered to be the most powerful of the four, and is their leader.

In spite of his less than savory actions, he is an honorable fighter at heart, and restores the party's health before every fight against him. He wears a "Cloak of Flame", which, when donned, absorbs all elemental magic, though ice elemental weapons can still damage him (the 3D version is an exception to this). He is voiced by Doug Lee*(credited as Lee Everest in the DS version) and Norio Wakamoto in the English and Japanese versions respectively.

Rubicante first appears in the Tower of Babil, where he is overseeing the destruction of Eblan. It is assumed that he led this attack. The attack succeeds, and Eblan's inhabitants are forced to flee to Cave of Eblan. He is first seen speaking to Dr. Lugae in the Tower of Babil in the Underworld, when Lugae transports him to the Overworld.

There, he is chased by Edge, the prince of Eblan, who seeks revenge for the destruction of Eblan and the assumed murder of his parents. Cecil Harvey, Kain Highwind, Rydia, and Rosa Joanna Farrell witness Edge's loss to Rubicante, and Rubicante's subsequent departure.

The party confronts Rubicante again in the upper half of the Tower of Babil, where Edge accuses him of not only destroying Eblan, but also turning his parents into monsters. Rubicante explains that the transformation of the king and queen of Eblan into chimeras was Lugae's doing, and in an interesting show of his character, when he saw what had happened to Edge's parents he actually cursed Lugae for what he did. He commends Edge's strength but sees him as being too emotional to be a worthy opponent. Edge ignores Rubicante's remark, and joins the party in attacking, and then defeating Rubicante. Unlike the other fiends, Rubicante accepts his defeat and compliments the party on their victory.

Rubicante is revived by Zemus, along with Scarmiglione, Cagnazzo, and Barbariccia. They fight Cecil's party one last time in the Giant of Babil together. However, they are all defeated again.

For battle information, see Rubicante (The After Years)

Rubicante appears at Eblan's Castle where he fights the party in a scripted battle. He gives Edge a clue on how to defeat Ifrit during the Second Battle of Eblan, who has taken control of the castle and Rydia and Edge learn Rubicante's Inferno as a Band ability. He reappears on the True Moon as a boss spawned by the Crystals.

The player can have a one-on-one fight with him as Edge, and obtain Rubicante's cloak, the Fire Scarf. With it, Edge can absorb any fire-elemental attacks. After defeating him, Edge acknowledges Rubicante is still a worthy opponent and has possibly made peace with him.

Blessed with perpetual Regen status, this durable Eidolon is well suited for drawn-out battles of attrition. However, due to its low HP, Rubicante is susceptible to fast-paced enemy onslaughts. Thus, the dominion legions choose to summon this Eidolon only once they have broken through the enemy's first lines of defense.

Rubicante is one of the many versions of Ifrit. This model has only two attacks, and has the lowest HP maximum among the fire Eidolons. 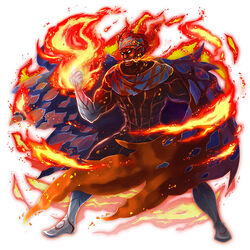 Rubicante allows the wielder to use the following abilities: 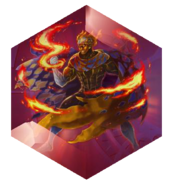 Rubicante is a summon and is a counter to an opponent's summon and triples the summoner's Bravery points. His original artwork from Final Fantasy IV is used.

Rubicante can be obtained on the second stage of the Shade Impulse III storyline. When the player collects Rubicante's Summonstone, the dialogue mirrors what Rubicante says to Edge before his boss battle in Final Fantasy IV.

Like the other Archfiends, Rubicante appears to act as a "counter" version of one of the original Final Fantasy's Four Fiends. Specifically, Rubicante's Inferno accomplishes the same result as Tiamat's Wind Arcana; tripling the Summoner's Bravery. Both Rubicante and Tiamat are the fourth and final "fiend" the party encounters in their respective games.

There is also an equipment bearing his name, called "Rubicante's Cowl".

In Dissidia 012, he can be purchased from certain Moogle Shops for 100 KP. Rubicante also appears as a tutor for the Labyrinth feature at the in-game manuals.

The Autarch of Flame, Rubicante is the greatest of the Archfiends. Cloaked in fire, he freely wields his Inferno to burn all that stand before him, leaving only bone and ash behind in the raging flames...

Rubicante, along with the other elemental archfiends, makes an appearance as an enemy.

Rubicante appears as an enemy in Battle Music Sequences.

Rubicante from Final Fantasy IV appears as an enemy.

Rubicante appears as an enemy during an event called "Showdown". In battle, Rubicante uses Scorch. 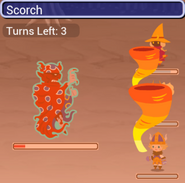 Rubicante appears as a boss.

A man cloaked in crimson, leader of Golbez's four Archfiends. Rubicante is a noble foe who shuns deception, sincerely believing that the only good fight is a fair fight. A master of fire, his Inferno attack is particularly deadly.

Rubicante is a boss in dedicated FF IV stages and is a playable character who could be initially recruited during the Challenge Event Fate Calls, Power Awakens as a First Time Reward for completing the event's Lair of the Father stage on Clasic difficulty.

Excellent! You are a fine warrior indeed.

Rubicante appears as a character and summonable vision. His job is listed as Elemental Archfiend.

Rubicante's Trust Master reward is the Cloak of Flames accessory.

Rubicante's stats at his highest levels are as follows (with no passive abilities taken into account), along with the maximum amount of stat points that can be increased through pot-enhancements:

Rubicante can equip the following weapons: staves and rods.

He can equip the following armors: hats, clothes and robes. 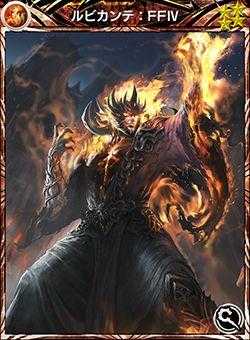 A parody of Rubicante from Final Fantasy IV makes an appearance in the 4th chapter of the game along with the other Archfiends. The chapter number they appear in alludes to the number 4, their game's origin. The seasons have been stolen, and by defeating the Four Archfiends will return the seasons. They each have a castle, and are located on the four corners of the map. Samakante (サマカンテ, Samakante?), the Fiend of Summer is found in the southwest castle.

This leader of the Elemental Archfiends bends fire to his will and dons a cape which wards against ice, his sole bane.

Rubicante, along with Cagnazzo, Scarmiglione, and Barbariccia are all promotional cards, all of whom were special captures to celebrate the release of Final Fantasy IV for the Apple iPad. All of them are Rank 5 (the rarest), with Rubicante being a Humanoid-type Guardian that would have been found in the Glaverow Volcanic Zone.

Rubicante appeared as a limited-time event boss in Rise of Mana. His appearance simply reuses his boss model from the 3D remakes of Final Fantasy IV. 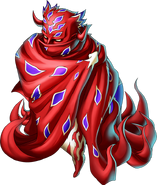 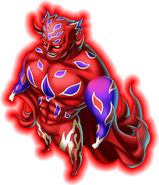 Rubicante in the opening and closing FMV for Final Fantasy Chronicles. 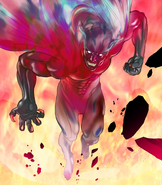 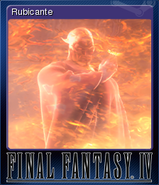 [view · edit · purge]Rubicante is a demon in the Inferno of Dante's Divine Comedy. He is one of the 13 Malebranche ("Evil Claws") who guard Bolgia Five of the eighth circle of Hell, Malebolge. Vulgar and quarrelsome, their duty is to force the corrupt politicians to stay under the surface of a boiling lake of pitch.