A secret passageway into the palace vaults, a door, and a Magicked Stone to open the way.

The Royal Palace is an unrevisitable location within Rabanastre in Final Fantasy XII. The player can access it via a secret entrance in the Garamsythe Waterway, but it can never be visited again.

A short walk north from the center of Rabanastre will lead you to the gates of the royal palace. Before the war with Archadia, this magnificent structure was home to the Dalmascan royal family, and barracks to the order of knights that served them. It is currently employed as a living quarters and apartments by the recently appointed consul from Archadia. The palace itself was built several centuries ago and has since been home to many Dalmascan monarchs, King Raminas being the most recent. Numerous additions have been made to the palace over the course of its long history (the Royal City of Rabanastre having several times fallen under the control of foreign powers through invasion), but the overall bearing of its architecture is true to the original Galtean design. Within the palace are secret chambers containing documents and treasures belonging to the royal family. Few who live beyond the palace walls know how they may be found.

The Cellars area has many treasures, but one of them is a forbidden chest (labeled in red) that, once claimed, prevents the player from obtaining the Zodiac Spear in Necrohol of Nabudis. When sneaking into the palace there are several chests in the Cellar. The forbidden one is among the two chests in the southeast corner. The forbidden chest contains an Elixir, while all the others have common items like Potions and Antidotes, so the player can easily reset the game if they take the wrong treasure.

The concept of forbidden chests was removed in the Zodiac versions.

No chests respawn in this location.

This treasure only appears in the Zodiac versions.

In the manga version, Lord Rasler of Nabradia came to the palace as the kingdoms of Dalmasca and Nabradia wished to secure a political alliance by having their heirs wed. To everyone's surprise Rasler declared he couldn't marry Princess Ashe, and she stormed off. She overheard members of Neo-Rozarria Faction conspiring to kill her father, King Raminas B'nargin Dalmasca, in a closed-off area of the palace that was under construction, as the faction wished to stop the marriage from going forward so Nabradia would ally with Rozarrian Empire instead.

Ashe was almost spotted but was saved by Rasler who had followed her. Thinking Rasler was in on the plan Ashe protested and fell through a weak flooring into the Garamsythe Waterway. Rasler jumped in after her and explained he was not part of the plot, on the contrary, he refused the marriage to protect Ashe from assassins. The two made their way back to the palace and to the King's bed chambers where the Neo-Rozarrians were about to kill the King. Captain Basch fon Ronsenburg jumped from under the king's bedsheets and the Order of the Knights of Dalmasca stormed the bedroom to arrest the conspirators. Ashe was embarrassed to find she was the only one unaware of the plot.

Some years later, Dalmasca has been occupied by the Archadian Empire. The new consul, Vayne Solidor, has been appointed to the city of Rabanastre, and to commemorate the event a grand fete is held. A local thief, Vaan, full of hatred toward the Empire that has invaded his homeland, wants to sneak inside the palace during the fete and rummage its treasure rooms to "take something back for the people of Dalmasca".

Vaan finds his way to Old Dalan who knows a hidden way inside the palace from the Garamsythe Waterway, but Vaan will need to use the Sunstone to get in. Vaan completes a quest on the Giza Plains to get the stone and heads to the sewers.

Once inside the palace Vaan sneaks past the guard. With the Sunstone he opens the way to the secret treasure room and finds the Goddess's Magicite but is caught by two sky pirates, Balthier and Fran, who demand he hand it over. Vaan refuses and makes a run for it, but as he is escaping through the palace grounds the Resistance attacks the Palace. Amid the fighting Vaan is rescued by the sky pirates, but the magicite Vaan is holding drains the pirates' hoverbike's power, and the trio crash-land in the Garamsythe Waterway.

The manga version expands on the events. Vaan almost gets arrested when he steals from an Imperial soldier and Penelo asks him to accept work from Migelo to stay out of trouble. Vaan decides to sneak into the palace to steal from the treasury and take back some of Dalmasca's money. Vaan poses as one of Migelo's workers and helps unload food to get into the palace, but is caught by the soldiers and flees into a hidden passage when he sees a specter of Reks walk through a wall. Meanwhile Vossler and a band of Dalmascan insurgents attack, having snuck weapons and troops into the castle the same way Vaan had gotten in.

Vaan discovers piece of magicite in the treasure room and is confronted by Balthier and Fran. An explosion distracts them and Vaan escapes. An airship bombards the palace, and as Vaan evades the soldiers he finds Vayne talking to Gabranth. Vayne reveals that through a spy in the insurgents he knew of the attack and kept security lax to bait them into an attack to trap and destroy them. Vaan is discovered, and is brought before Vayne. Vaan attempts to attack him but is blocked by Gabranth.

Vayne orders Vaan executed, but Vaan is saved by Balthier who throws Vaan over a balcony and leaps after him, Fran catching the two on her hoverbike. Vaan vows to one day be strong enough to successfully strike Vayne. The bike crashes in the Garamsythe Waterway, and the three form a temporary alliance to locate an exit.

The theme that plays during Vaan's visit to the palace is called "Clan Headquarters" (クラン本部, Kuran Honbu?) that also plays at the Clan Centurio base of operations.

The map for the palace is found in an urn in the Cellar Stores area. If the player misses the map it can still be acquired by purchasing from a cartographers' moogle in Old Archades' Alley of Low Whispers for 100,000 gil. 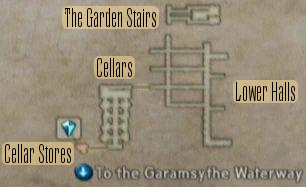 Map from the original Final Fantasy XII that contains all treasure information.

Palace from the outside.

Hawk Signet on the floor of the Palace.