High seat of the Crown. At its hear towers the luxurious keep that houses the Ivalice's royal family.

The Royal City of Lesalia, also known as Lesalia Imperial Capital (王都ルザリア, Ōto Ruzaria?) is the capital of the kingdom Ivalice from Final Fantasy Tactics. Ramza Beoulve comes here to ask for his half-brother Zalbaag's assistance in stopping the war. Zalbaag refuses, but Ramza is reunited with his sister Alma Beoulve at the city's back gate. The two are suddenly attacked by the Heresy Examiner Zalmour Lucianada, but they manage to repel him. Ramza then agrees to let Alma accompany him to Orbonne Monastery.

The game data contains data on dummied battlefield maps, which include the Inside Castle Gate at Lesalia, Outside Castle Gate at Lesalia, and Main Street of Lesalia. These are partially finished maps and glitches occur if the player activates them via a cheating device, but are still somewhat playable. The move and effect ranges aren't being displayed properly and at certain angles, and the map will not display properly. The maps can be access via a Gameshark through the World Debug Mode.

The Main Street of Lesalia is the only map where the terrain Road can be found. Since the map cannot be accessed normally, the tile has been dummied out. The description for it states: A man-made thoroughfare. If a Geomancer stands on this tile, they will use the Sinkhole ability.

Lesalia was the capital of the ancient, thought-fictional kingdom of Ivalice. Its ruins are located far beneath the Royal City of Rabanastre, accessed via the Garamsythe Waterway. Lesalia is discovered after Rabanastre is destroyed by the Garlean Empire in a show of force. 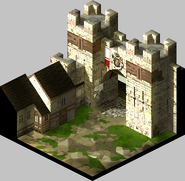 Inside Castle Gate in Lesalia. 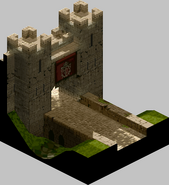 Outside Castle Gate in Lesalia.