Row (チェンジ, Chenji?, lit. Change), Change, Swap Rows, Rear or Front, is a recurring term and battle command in the Final Fantasy series. It refers to a unit's position in battle, which affects overall performance. A player character can either fight in the front row or the back row. Most Final Fantasy games allow the player to change the rows of a party member freely even in battle, but sometimes switch back after the battle has ended. Starting a battle as a back attack reverses the characters' row placement.

Fighting in the front row allows characters to deal regular damage to enemies, but in turn receive regular damage from enemies as well. This is generally best for characters with high HP and Defense, such as the Warrior or Paladin jobs. Being in the back row will make characters inflict less damage with melee weapons, but receive less damage from enemies as well. This is best for characters with low HP and Defense, like White Mages or Summoners.

Monsters can also be in the back or front row, depending on the placement of their allies. They will experience the same increases/decreases to damage as the player's characters do, although killing the front-row enemies typically moves back-row enemies forward.

Typically, there are exceptions to the above rules. Magic is almost universally unaffected by row. Most games have ranged weapons that inflict normal damage regardless of row: bows, throwing items like boomerangs and shuriken, and guns usually ignore row, along with other specialized weapons. Some games also have an ability known as Long Range or Reach that gives the equipped character the same power as if they were using a long-ranged weapon.

In most versions, characters in the back row can only be hit by magic and bow attacks, and can only attack with bows and magic themselves. They can wield other weapons, but they always miss. The player can only change rows outside of battle, triggered in the NES version by pressing

on the map, and from the main menu in other releases. In Final Fantasy Pixel Remaster however, rows function similarly to the rest of the series: melee attacks that come from or target a character in the back row or a monster not in the front two rows will work, dealing half damage.

In the 3D versions, the Rear command makes a character go in the back row while the Front command makes them go to the front row.

Unlike in most games, which allow players to pick and choose which row they want their characters in, Final Fantasy IV forces players to put two characters in the front row and three in the back row, or vice-versa. The player can change whether they want two or three characters in the front or back row in the menu screen, and can temporarily force all party members to change rows in battle by selecting the Change, Swap or Swap Rows command, which players can find by pressing

on the control pad or control stick.

The Swap Rows returns as a command and it functions the same way.

This functions works the same as in the original game.

Long range attacks that ignore row include damage done by bows, whips and boomerangs. The Ninja can also use the Throw command, and the Samurai can use Zeninage, which deal ranged damage. The ability Long Range is exclusive to the GBA and succeeding versions, and is the Level 3 ability of the Gladiator class. The enemy ability Magnet reverses the party's rows.

In the back row, damage and attack power are halved. Row can be changed using the main menu by pressing

. The Row command is also found by pressing

on the character's battle command window. Usually only attacks dealt with the Attack command are affected by being in the back row, but the characters' special commands, such as Sabin's Blitz and Edgar's Tools commands, are unaffected. Maces, boomerangs, clubs, and gambling weapons (such as darts and cards) are long range weapons and deal full damage from back row.

The enemy ability R. Polarity switches a player's row. Battles that are Pincer or Side Attacks have no rows, but the player is still able to use the row command.

The spells auto-cast from weapons do not ignore the caster's row, so from the back row they will do half damage, unless the weapon that casts the spell ignores row.

Attacks dealt with the normal Attack command, Added Cut, and 2x-Cut are the only abilities affected by row, meaning Limits, Morph, D. blow, Slash-All, and 4x-Cut deal full damage from back row.

Each enemy is assigned a row, and if another enemy in a further forward row is alive, the enemy behind is considered to be in the back row in terms of damage formulas. Though potentially there are three or more rows, all enemies bar those in the front row take equal damage as back row enemies.

Some enemies are not assigned a row, and are instead assigned to be out of reach. These enemies cannot be hit by short-range attacks. A number of enemies switch to this state if they have a flying form.

Barret, Red XIII, Yuffie, and Vincent have long range weapons, and all characters can equip the Long Range Materia to deal ranged attacks. The Throw command and Coin Toss are also considered long range. Battles that are Side Attacks have no rows. The enemy ability Electromag switches the party's current row.

In some battles the Change command to change row is grayed out. This happens in the battles fought as Yuffie in the Wutai Village pagoda, and Cloud's final showdown. In these battles the enemies also start with an empty ATB gauge and the player's first physical attack will deal double damage, as if the battle was a back attack.

Although it is not flagged as a long range weapon and it uses the melee animation, Barret's Pile Banger suffers no damage penalty from attacking from the back row or at enemies in the back row even. This is most likely a bug.

Toggle between front row and back row.

Party members have two rows, but enemies have no row mechanic (although Ozma will be "out of reach" without long range weapons unless the player completes the friendly monsters sidequest). Those in the back row take half damage from physical attacks, but also deal half damage with their own physical attacks.

Vivi, Dagger, Freya, and Eiko join the party being in the back row by default. Zidane, Steiner, Freya, and Amarant can learn Long Reach, which allows them to deal normal damage from the back row with their normal attacks. The game's only naturally long range weapons are the rackets, but Amarant can also throw weapons.

Magic and many abilities, like Freya's Jump, ignore row.

This game does not have a row mechanic for party members, but it does for certain enemies. The YAT-97 and YAT-99 are in the back row during their battles, while other enemies are in the front row. Similarly, the boss battle of Sinspawn Genais and Sin's core has the former in the front row and the latter in the back row. In these battles, the enemies in the back row are out of reach of melee attacks until all front row enemies have been defeated, at which point the party moves forward (so the formerly back row enemies are now in melee range).

Here known as Row Change (隊列変更, tairetsu henkou?), players may change row out of battle but not in battle. Unlike most character configuration changes, character row may be changed even while in a dungeon. Row Change may be accessed by choosing Party (パーティ, pāti?), then Members (メンバー, menbā?), then Party Formation (パーティ編成, pāti hensei?). Characters retain their assigned rows even when not in the current party. Characters start in the front row when they first become available.

Except in the battle screen, if the player presses the Select button, the Alter Order screen will be displayed to change the positions of the characters, except for the guests. The characters in the front will be attacked first and more often, so keeping weak characters behind where they will be protected. 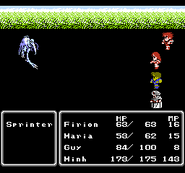 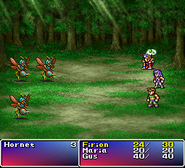 Tellah in back row in Final Fantasy IV.

Barret in back row in Final Fantasy VII.

Vivi and Garnet in back row in Final Fantasy IX.