'Round and 'round the hand does go. Who will it slaughter? Nobody knows!

Roulette (死のルーレット, Shi no Rūretto?, lit. Death Roulette) is a Blue Magic spell that casts Death on a randomly chosen target on the battlefield, enemy or ally. The targeted character must generally be under the Auto-Life or NulDeath status to survive the instant death and thus learn the spell.

Roulette is a Blue Magic spell the Blue Mage can learn from Azulmagia, Death Dealer, Parthenope, and Shinryu. The spell costs 1 MP to cast. A minor glitch prevents the player from seeing the Roulette cursor if they attempt to target a party member or enemy with any sort of action while Roulette is being used.

Spins a roulette wheel that KO's the enemy or ally on which it stops.

Roulette is a Lore for Strago that costs 10 MP to cast, an ability of Gau when raging Ahriman, or Gogo when using either command. When used via Rage, Roulette will lose its random targeting and target enemies like any normal attack spell as its random nature comes from an automatically moving cursor, something Rage does not supply. Strago can learn Roulette from the Ahriman, Alluring Rider, Dark Force, Nelapa, and Onion Knight (or from the raging Gau).

Enemies can cast a variation of Roulette, which heals the undead.

Roulette is an Enemy Skill learned from the Death Dealer. It costs 6 MP to cast. The units' Luck appears to affect the chance of the spell hitting; a party with high enough Luck is virtually never hit by the spell, which can make it annoying to learn.

Quina can learn Roulette from eating the Ghost, Hecteyes, or Zombie. It costs 18 MP to use. It cannot be reflected and works with Return Magic. The enemies Hecteyes and Zombie use this spell as well. As it is exceptionally rare for an enemy formation to include four or more enemies, the odds are stacked against the player's four-member party when using Roulette, and in the endgame, all battles in the final dungeons have only one enemy.

Roulette is used by the boss Angra Mainyu in the World of Darkness. Rather than cycle through individual party members, the hand instead cycles through four quadrants of the arena in a clockwise pattern. To avoid getting caught off guard, players need to destroy four hourglasses before it can freeze them in place, leaving those in the chosen sector unable to evade instant death.

The roulette decides who is KO'd...friend or foe?

Roulette is a Blue Magic spell learned from Ahriman. It will instantly KO a random unit (excluding certain bosses) at the cost of 20 MP. For a Blue Mage to learn it they must have the Auto-Life status to survive the attack.

Roulette is a Blue Magic spell learned by Blue Mages from Ahriman-type enemies, which costs 12 MP to cast. To learn this skill, the Blue Mage must be under Reraise-status and be hit by it, however, the random target of the spell makes it difficult to learn. 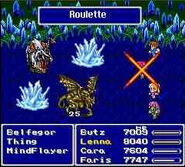 [view · edit · purge]Russian roulette is a potentially lethal game of chance in which a player places a single round in a revolver, spins the cylinder, places the muzzle against their head, and pulls the trigger. "Russian" refers to the supposed country of origin, and roulette to the element of risk-taking and the spinning of the revolver's cylinder being reminiscent of spinning a roulette wheel. As only one chamber is loaded, the player has a one in n chance of hitting the loaded chamber, where n is the number of chambers in the cylinder.