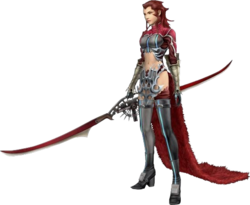 Rosso is a boss in Chapter 8 of Dirge of Cerberus -Final Fantasy VII-. With her blade and gun weapon, Rosso is capable of fighting in both long-range and short-range battles. In the first part of battle, players are advised to keep their distance because her weapon combos are very powerful. After she loses so much HP, Rosso will begin to launch shockwaves that travel around in parabola paths to hit the player except when they are behind cover. There is a good way to dodge these, the Rush command. It is best to fight at a distance.

After 50% of her HP is lost, Rosso transforms into Bloodburst Rosso 朱のロッソ バースト (Ake no Rosso Bāsuto?, lit. Rosso the Crimson Burst). Though this form is exactly the same in appearance, even keeping the same HP, Bloodburst Rosso possesses a stronger projectile attack.

This section about an enemy in Final Fantasy Record Keeper is empty or needs to be expanded. You can help the Final Fantasy Wiki by expanding it.
Retrieved from "https://finalfantasy.fandom.com/wiki/Rosso_(boss)?oldid=3239346"
Community content is available under CC-BY-SA unless otherwise noted.