The mighty WRO... they wouldn't last a day in Deepground.

Rosso the Crimson is a member of the Tsviets and one of the antagonists of Dirge of Cerberus -Final Fantasy VII-. She is a sadist and her weapon is a unique double blade capable of gunfire, similar to a gunblade.

Slashed, strangled, and slaughtered. Beaten, stabbed, and crushed. Garroted and impaled. Shot and executed without mercy. Nicely said, Weiss. I wonder if this will be a little more amusing than last time.

Rosso is a woman in her late twenties with shoulder-length crimson hair and matching eyes. She has a widow's peak and her hair is styled spiky. Rosso's outfit is revealing; she wears a connected one-piece baring the Deepground colors with crimson sleeves. She wears armguards and gloves with spiky fingertips and a long, furry crimson cape that drags behind her, thigh-high boots and torn red stockings.

The rigorous training regiment of Deepground shattered Rosso's psyche, leading to an obsession of bloodying her victims, hence her title "the Crimson". Rosso is now sadistic and loves to kill. She is loyal to Weiss and considers the fulfillment of his wishes the goal of Deepground. She is a narcissist, declaring in her final moments that "no one will stand above me!" Like the others Tsviets, she despises the Restrictors. It is revealed in the multiplayer mode that her dearest wish to go outside of Deepground, having spent her entire life there.

Rosso was born into Deepground in 1985, making her 25 in Dirge of Cerberus. She was the first success of the Deepground experiments with mako energy, and her birth prompted further research and experimentation on Deepground troops. Alongside other Tsviets, she was infused with Genesis Rhapsodos's cells after Deepground was repurposed to house a new generation of living weapons for Shinra, and the training regimen she underwent twisted her psyche and she became a murderous sadist.

Rosso wants to see the real sky since she has only ever seen projections, and decides to kill countless Deepground soldiers to get her point across. A Restrictor challenges her, and though she puts up a good fight, she is defeated. She is summoned by the Restrictor along with Azul to spar with Weiss and is easily defeated, but transforms into Bloodburst Rosso. Though she puts up a better fight the second time, she and Arch Azul are again defeated by Weiss. With the Restrictor near death, the chips implanted in the Tsviets' brain stems begin to wear off. Rosso and the other Tsviets laugh as the Restrictor breathes his last breath.

You know, this is the first time I've ever felt the rain on my skin. But then again, I hadn't even seen the sky until a few days ago.

Vincent Valentine finds a near-dead World Regenesis Organization (WRO) soldier in Edge who tells him of a woman in red who slew their troops in the warehouse and was gathering civilians. When Vincent arrives at the warehouse, Rosso is found to be more than a match for him and Chaos takes Vincent over. Chaos is too strong for Rosso to handle, and she flees.

She meets Vincent again in Nibelheim in the Shinra Manor where she steals the Protomateria, the key to controlling both Chaos and Omega. Rosso is now prepared to deal with Vincent and might have killed him if not for the timely intervention of Yuffie Kisaragi. When the WRO launches its assault on Midgar, Rosso fights Cloud Strife. The outcome is unknown, though both Rosso and Cloud survive. Rosso confronts Vincent for the final time in the old Shinra Building where they engage in an all-out battle and Rosso is defeated. Prideful to the bitter end, Rosso tells Vincent their time together is over and that Azul is waiting for him. Determined to not let him have the pleasure of killing her, she collapses the portion of the building she stands on and plummets, laughing maniacally, to her death.

This section about a character in Dirge of Cerberus Lost Episode -Final Fantasy VII- is empty or needs to be expanded. You can help the Final Fantasy Wiki by expanding it.

Rosso is fought as a boss in the Shinra Headquarters.

She is voiced by Atsuko Tanaka in the Japanese version and Mary Elizabeth McGlynn in the English version, the latter of whom gave her a Romanian accent.

Rosso in a cutscene. 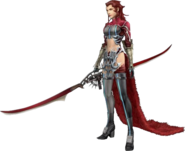 Rosso in the warehouse.

Her name is the Italian word for red, though the -"o" ending should be replaced with -"a" in keeping with gender, meaning that her name is technically masculine in Italian. Her name is essentially "Red the Red".