A stone slab inscribed with peculiar characters. Once it conferred wisdom on many.

The Rosetta Stone (ロゼッタいし, Rozetta Ishi?), also known as The Geomagnetron, is a recurring item in the Final Fantasy series. Appearing as an important key item in the first original Final Fantasy, it is related to learning new abilities.

A tablet inscribed with ancient writing.

The Rosetta Stone (also called the Slab) is a key item that is found in the Sunken Shrine. The stone was originally lost when the Shrine fell beneath the waves after it was attacked by the Fiend of Water.

Bringing it to Dr. Unne in Melmond will enable him to teach the Warriors of Light Lefeinish, thus, allowing contact with the ancient Lufenian civilization, holder of the Wind Crystal.

The Rosetta Stone is a GF ability item that can teach a Guardian Force the "Ability x4" ability allowing a character junctioning the GF to equip four support abilities at once. Rosetta Stones are rare and only a few can be found. It is a very rare reward for playing a prisoner at Triple Triad in D-District Prison. The one who charges 200 gil has a chance of giving out a Rosetta Stone. One can be obtained by repeatedly accessing Cheryl's Shop in Esthar City; the shop is closed, but eventually gives out a Rosetta Stone if the player attempts to access the shop.

Finally, there is one Rosetta Stone in Ultimecia Castle: the player must open the gate right from the fountain area by pressing all the keys of the organ simultaneously to rid of the bars barring the entry to enter the sewers. To drain the sewers of water, the player needs to find the Floodgate key by using the elevator found in the castle. The player must place a lighter party to the left side of the elevator and switch to the other, heavier, party, which is moved on the right side of the elevator.

Switching party at this point allows the party to access a secret room with a Curaga draw point and the Floodgate Key. Lighter party is achieved by having a party with at least two females in, as long as the lone male isn't Irvine. The Floodgate Key is used in the lever in the prison, right next to the door that leads to Red Giant's chamber.

The player can also refine a Rosetta Stone from a Shaman's Stone with Eden's GF Abl-RF ability. Shaman's Stones can be refined from Mog's Amulet (Chocobo World item) and Dark Matter.

The specially charged stone has the ability to store the kinetic units necessary for waypoint travel.

Geomagnetron is a key item obtained from Darcia. It is used in the mission, "The Geomagnetron".

Rosetta Stone is a key item that can allow it users to understand and speak Lufenian. It is acquired from Rosetta Tower.

Rosetta Stones can be obtained in the shop, as storyline bonuses, and in the Blackjack course of Duel Colosseum. They can also be traded for one each of a Wind Stone, Water Stone and Life Stone. They can be exchanged for a RPG Mode AI boost skill or accessory slots in the shop.

A stone necessary for warrior to strengthen themselves. Try asking at the shop.

Rosetta Stones return and can be bought from Moogle Shops for 10 KP or found in the treasure chests on the world map.

Rosetta Stones are a consumable item. They are usually earned upon completion of an advanced difficulty event dungeon. Rosetta Stones serve as synthesis materials that grant 3,000 leveling points to any supported Relic, also augmenting the Relic's strongest stat by one point. Augmentation capacity is determined by the Relic's base or combined rarity rank, but accessory Relics cannot be augmented as they cannot be leveled.

This section about an item in Final Fantasy Record Keeper is empty or needs to be expanded. You can help the Final Fantasy Wiki by expanding it. 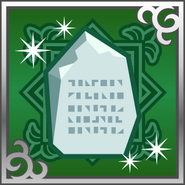 [view · edit · purge]The Rosetta Stone is a famous slab containing Egyptian hieroglyphic, demotic, and Greek text, that was discovered in Egypt in 1799 and deciphered by Jean-François Champollion. It was instrumental in deciphering the lost language of Egyptian hieroglyphics.