A white magic practitioner with an otherworldly aura. Just like her father, Roselia was born and raised in the community of white mages that would eventually come to be known as Mysidia. Instead of having any noble intentions, she is driven by a sense of practicality and the knowledge that healing is her forte.

Roselia is a character and summonable unit from Final Fantasy Brave Exvius. A figure from before the times of Mysidia's foundation, her vision can be summoned by Rain and Lasswell to aid them in their battles.

Originally an inhabitant from what now comprises the territories of Magi Nation Mysidia,[1] Roselia and her father belonged to a community of white mage researchers. Born and raised in that environment, Roselia became a magic expert as she immersed herself in research, driven by a sense of practicality rather than good intentions due to her father's influence.

However, a plague struck her community and fellow researchers, but the fact that she was unable to cure her peers made her keenly aware of her own empathic limitations. Unable to stop the outbreak with her white magic, she too eventually succumbed to the plague that ravaged her homeland. In her death, due to her bitter regret, Roselia left behind a crystal with her memories, to be summoned by those with the power of visions.

Filled with piercing devotion after failing to heal herself and others with her white magic, her vision enjoys the cold snowy season clad in red (her "Santa Roselia" attire), lifting spirits and bringing smiles to peoples faces with her gentle healing.

In The White Sage and the Magic Cane Story Event her story is given deeper background. Roselia was the first real friend Sakura made while in Lapis and both enjoyed each other's company deeply, especially the White Mage who was bedridden due to the plague that struck on her, nonetheless she kept pushing hard on her studies. She confided to Sakura that she was developing a Spell of Divine Protection, but succumbed to the illness before Sakura could see any of it. Her parents, deeply saddened by her loss, thanked Sakura for her friendship and buried her remains with her staff as per wishes. Sakura left the town as the loss of her friend was too much for her.

In time, Sakura founded Mysidia and made White Magic research a huge priority ensuring the illness that took Roselia's life would not kill anybody else, in honor of her dear friend.

Following the events of Season One, Sakura was investigating the Magic Library in order to learn more about the dimensional gate and a means to travel to Paladia to search for Rain. While navigating the building, her dear weapon breaks apart having taken the toll of 700 years worth of use. This prompts her to search for information about Ruggles a skilled Dwarf Blacksmith and his apprentices who could repair her weapon. Not knowing the details, Sakura immerses herself into the Memory World of her mind in order to talk to Roselia and get the information she needs.

As time passes in her quest, Sakura regularly frequents the Memory Roselia in order to seek for counsel and emotion support, something Sakura felt very guilty about as she felt she was using her friend, even if a mere memory of her. After Ruggles' disciple, Verun forged Sakura a new weapon as per request to let her Scythe rest, she decided to stop visiting the Memory Roselia (as she was nearing the time of her death) and decided to visit her grave for the first time in several years.

In her grave, Sakura expresses that she founded Mysidia and defeated the plague in her honor, separated from her old comrades, made up with them, and also met new friends along the way and that she's preparing to leave in a journey to find one of them who has been lost, bidding a temporal goodbye to Roselia as she will not visit in likely a very long time. Just as she prepares to leave, Roselia's Staff glows and casts a spell on Sakura, which she understands to be the Spell of Divine Protection she so long worked to craft. Sakura is brought to tears that the Spell was meant to her and promises to return as Roselia's staff glows.

Ultimately this spell is revealed to be the White Light's Protection passive ability found in both Roselia and Blossom Sage Sakura, Sakura's season two variant and her appearance at the time she received the spell.

Roselia is one of the oldest White Mages in the game, as such her skill arsenal was rather limited and outdated upon the arrival of several healers. Upon reaching her 6★ rarity, Roselia improves dramatically learning vital passive abilities that increase her HP, MP and DEF, overall making her more durable and more sustainable. Roselia's top selling point is Triple White Magic which allows her to Triple Cast her White Magic abilities greatly increasing her healing potential, and if Curaga is enhanced to its maximum, can heal as much as the strongest 5★ healers.

She has a few cons however, as she lacks the ability to use any Raise spell, and her revival abilities come from her Limit Burst or by KO'ing herself through White Light's Rebirth. Her overall stats are also low but to be expected of a 3★ base rarity unit. Her SPR is also very low although with proper equipment this is easily remedied.

Nonetheless Roselia is a very serviceable unit, offering decent Healing prowess, MP recharge and status ailment removal, all in a comfortable and easy to acquire unit. Excellent choice for new players and a decent option to consider at times for veterans.

Roselia's job is listed as White Magus. A 3-6★ Rare Summon, Roselia's main battle role is Healing only. She has no natural element or status resistances, and can equip only staves, instruments and maces. Regarding armor, Roselia can wear light shields, hats, clothes, robes, and accessories only. Roselia' Trust Master reward is the Equip Staff materia, which enables a unit to equip staves.

Atermios has a Global-exclusive variant: "Santa Roselia" (4-6★) unit, available only during the A Frosty Offensive event. Her job, role and equipment capacity remain the same, but features different abilities. Her Trust Master reward is the Pure Heart ability materia. 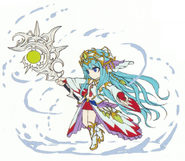