The Ronso is a race of muscular, anthropomorphic feline humanoids from the world of Spira in Final Fantasy X and Final Fantasy X-2. The Ronso live at the base of Mt. Gagazet and guard the sacred mountain. They are formidable warriors, known for their strong sense of honor and loyalty, as well as their pride and quickness to anger. Kelk Ronso is the tribe leader and their representative in Bevelle as a Maester of Yevon. The Ronso race is represented in the blitzball league by the Ronso Fangs.

While they have been seen traveling across Spira, the Ronso village is located at the base of Mt. Gagazet. Hardly anything is known of their culture, other than that they view the mountain a sacred location and trekking up Gagazet is viewed as a spiritual journey for a Ronso seeking guidance. No actual Ronso dwellings are ever seen. It can be speculated that they favor strength based on their warrior-like appearance and mannerisms.

"Kimahri's Story" in Final Fantasy X Scenario Ultimania states that the Ronso take pride in protecting the mountain, and have lived for a long time in these lands, competing with each other over who is worthy of being a guardian of the sacred mountain. Thus the genes of the powerful are continuously passed on, and though the number of the tribe is not large, for generations it has produced a great many of those both blessed with superior mind and body. They have gained a reputation throughout Spira as a valiant people, ideally suited to protecting the lands at the edge of the world. 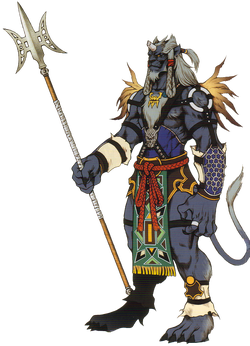 Ronso are humanoid in stature, standing above two meters in average height (with the males considerably larger and more muscular than the females, who possess a faster and more athletic body type). They are feline in appearance, possessing hands/claws and foot paws. They walk on (what would be for humans) the balls of their feet and possess dew-claws as well as foot pads. Possessing leonine tails that roughly measure half of their body lengths, Ronso bodies are covered in blue fur (perhaps a trait due to their living in a winter climate) with patches of white (though the color can be darker blue or yellow depending on the individual) fur around the thighs, calves, shoulders, chest (males), tail-tips, and scalp. The abundance of the fur the patches consist of seems to be greater on the males than the females. The scalp fur, or mane, is usually tied back or styled in a similar way to hair.

Ronso possess feline attributes like muzzles and fangs as well as a distinct cat-like nose. Their ears, while located similar to humans, have a more elven shape and are thought to be capable of articulation similar to cats. The male Ronso grow a horn from the forehead that denotes status and power, and to lose it in battle is considered shameful. Kimahri was one such Ronso who had been cast out due to its loss and his comparatively small stature next to his kin.

Both genders possess carnivore fangs, hinting that they may be meat eaters (it is unknown if they are omnivores). Their eyes are yellow, contrasting against their fur, and give the impression of a predator's gaze.

Ronso refer to their young as "pups" despite their cat-like nature.

Despite superficial appearances, the Ronso are capable of speaking in the same way as humans, as Maester Kelk shows. In fact, their seemingly crude use of grammar is deliberate. As with many cultures in real life, when forced to adopt a foreign language, people often shape it to better represent them. The Ronso avoid the use of personal pronouns, such as I or you, and instead always refer to people, including themselves, by name. They avoid possessive terms, such as my, as well as the verb "to be."

Once Yuna and her guardians arrive at Mt. Gagazet on their way to Zanarkand, Maester Kelk Ronso and the Ronso tribe block their path. They become convinced of Yuna's conviction, and allow the group to pass swearing to guard the gate from the Guado who seek to apprehend the group for treason. The Ronso underestimate Seymour Guado's power, however, and many Ronso are killed in their attempt to stall him from going after Yuna. As he catches up with Yuna's party, Seymour falsely boasts that Yuna's guardian Kimahri Ronso is now the last Ronso. He declares that the Ronso were "truly a gallant race. They threw themselves at me, to bar my path. One... after another..."

After Sin's defeat, the fall of Yevon, and the onset of the Eternal Calm, the few remaining Ronso youth foster a deep hatred of the Guado for what Seymour had done. One Ronso in particular, Garik Ronso, openly seeks revenge against the wishes of the new Elder, Kimahri. The sphere hunting group Gullwings thwart Garik's plans of rebellion when he climbs the mountain to receive guidance.

Confused and angry, Garik demands that Kimahri tell the Ronso the path the tribe should take, but Kimahri has no answer and Garik rejects him as their leader. Through the example of young Ronso Lian and Ayde (who had traveled Spira in a vain attempt to fix Kimahri's broken horn), Kimahri sees that the Ronso have to travel and experience Spira to discover their path. After proving to Garik violence is not always the answer, the Ronso elder decides it is for each individual Ronso to decide their path to ensure the tribe's future.

Ronso are introduced as a playable race in the Shadowbringers expansion. A male-exclusive race, they are known as Hrothgar in the main setting of the Source, but in the parallel world of the First they are called Ronso.

Fumi Nakashima, the sub-character designer for Final Fantasy X, has stated the aspect she concentrated on the most during the design phase was giving the characters from different cultures distinctive styles of clothing. Because the Ronso is a warrior tribe she gave them features that would allow them to engage in battle easily.[1]

Kimahri and the Ronso's designs and clothing may have been inspired by the rakshasa of Buddhist and Hindu mythologies. Hindu epics depict both good and evil rakshasas as powerful warriors, expert magicians, illusionists and shape-changers. However, the Ronso being blue also relates to their role as the users of Blue Magic.