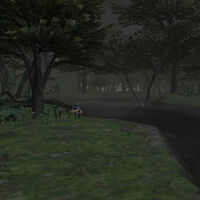 Ronfaure is a theme originally from Final Fantasy XI and is one of the few pieces Nobuo Uematsu composed for the game.

The theme plays in West and East Ronfaure. It is the fourth track on disc 1 of the original soundtrack.

"Ronfaure" is included in the music player as the second track of the Memories of FFXI (Disc 1) album purchased at Burbost Souvenir Emporium for 100 gil.

A shorter version of "Ronfaure" appears despite the long version being on the Duodecim soundtrack.

Ronfaure appears as the Field Music Sequence for Final Fantasy XI series play. The character treks through the Ronfaure region as the music plays, passing by a gate to San d'Oria, then passing through the area boundary of East Ronfaure into West Ronfaure. Then, the character runs by Fort Ghelsba and passes by the region's Conquest outpost, not marked as controlled by anyone.

"Ronfaure" appears as a Field Music Sequence. It is available by default.

"Ronfaure" appears as a playable Field Music Sequence. It is available to the player by default.

A piano arrangement of the song is included on this album.

A remix of the song is included on this album.

A chiptune version of this track appears as the second track of this guest arranged album. It is mixed in with "The Kingdom of San d'Oria" and "The Republic of Bastok".

The song appears in the 8-bit arrangement album featuring tracks from several Square Enix games. It is the ninth track in the album.

"Ronfaure" appears on this album released to commemorate the Final Fantasy 20th Anniversary.

"Ronfaure" is included in this live recording of an orchestral concert, performed by the Royal Stockholm Philharmonic Orchestra.

"Ronfaure" is included on this live recording of an orchestral concert, performed by the Kanagawa Philharmonic Orchestra and conducted by Arnie Roth held in Tokyo, in November 2010.

"Ronfaure" appears as the third track on this compilation album celebrating the eighth year since the conception of Final Fantasy XI.