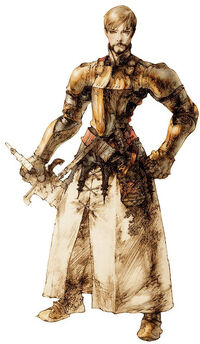 There must be strong, unwavering justice. And there must be fear to enforce that justice.

Romeo Guildenstern (ロメオ・ギルデンスターン, Romeo Girudensutān?) is the primary antagonist in Vagrant Story. He is the pious and noble leader of the Order of the Crimson Blades, also known as the Knights of the Cross, the militia under direct orders of Cardinal Batistum. He is 34 years old and 179 cm tall.

Guildenstern is a refined, noble knight with unmatched elegance. His charisma and leadership are so that those under him follow his orders without question. He shows a romantic side to Samantha, who is deeply in love with him. Even so, he is a cold and commanding general with no tolerance for failure. Such discipline hardens all those under him.

Guildenstern is not only a master of the sword, he is a master of magick. It is rumored that he has knowledge of the Dark Arts, and this proves true with his immunity to the Dark powers that Sydney used on his soldiers. Guildenstern's knowledge encompasses many things, and he holds a special attraction to Leá Monde and the Dark Arts.

Guildenstern commands the Crimson Blades, and expects no treachery within the ranks. Ordering his soldiers to action, unrelenting in his movement to apprehend Sydney, Guildenstern merely uses them as tools in his quest.

Noble in character and pious in faith, Guildenstern, as he is addressed, holds an ideal unlike any other in the folds of the Knights; he cares less of the means and more for the end. Graduating from the Academy in the highest esteem, Guildenstern achieved the Cardinal's recognition and was made part of the Crimson Blades, gaining through ranks to become the Cardinal's hand.

Guildenstern believes that due to the corrupt ones using their nobility and power to cause suffering and misery, the world is in need of cleansing. The Cardinal trusts Guildenstern and reveals of the dark powers within Leá Monde: the Gran Grimoire. At the Cardinal's behest he and others within the Crimson Blades dabble with the Dark Arts, able to use the Dark and gain immunity against it.

Searching for ways to access Leá Monde's powers, Guildenstern learns that the cult Müllenkamp, under command of Sydney Losstarot, has sieged Duke Bardorba's manor. Despite having no approval from the Valendia Knights of the Peace, the Cardinal allows Guildenstern to quell the cult's activities. Guildenstern fails to find Sydney and, tracing the cultists to Leá Monde, orders his army to move to the Dark City.

Along with his company and lover Samantha, Guildenstern apprehends Sydney, and discovers the cult leader holds the key to access Leá Monde's dark powers: the Blood-Sin tattoo on his back. Blinded by power, Guildenstern strips the tattoo off Sydney's back, placing it on his own body. With the key, Guildenstern needs to sacrifice a person, which he finds in Samantha.

Flooded with the powers of Darkness, Guildenstern faces one last obstacle, the Riskbreaker Ashley Riot. Guildenstern is defeated and even as he transforms to a grotesque winged one-horned demonic being, he falls to Ashley's will and determination. The dark powers leave Guildenstern as he falls to the ground where he bursts into flames and is destroyed.

Guildenstern is fought as the Final Boss at the top of the Grand Cathedral. He has two forms.

[view · edit · purge]Romeo Montague is one of the title characters in William Shakespeare's tragedy Romeo and Juliet who secretly loves and marries Juliet, a member of the rival house. His role as an idealistic lover has led the word "Romeo" to become a synonym for a passionate male lover.

His last name's origin is somewhat more obscure. [view · edit · purge]Guildenstern, along with Rosencrantz, are minor characters in one of Shakespeare's tragedies, Hamlet. He is also one of the protagonists in Tom Stoppard's absurdist play, Rosencrantz and Guildenstern Are Dead.