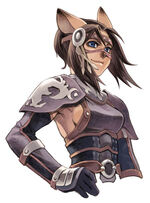 Though she is retired in her village in present day Vana'diel, she is a major character in the Windurst branch of the Wings of the Goddess storyline. Players who ally with Windurst in Campaign are part of her Cobra Unit Mercenaries, and she herself will present new medals to those who distinguish themselves. As major, is a tough yet motherly commander, often worrying about the welfare of her soldiers, and frequently works with fellow Mercenary Major Perih Vashai of the Anaconda Unit.