Final Fantasy Wiki
Register
Don't have an account?
Sign In
Advertisement
in: Characters in Final Fantasy: The 4 Heroes of Light, Guest characters

I've been alone in Spelvia for more years than I can count. The only voices I hear are pleas for help. Demands and entreaties and prayers... over and over again!

Rolan is a temporary-playable character from Final Fantasy: The 4 Heroes of Light. He is the ruler of Spelvia.

Rolan appears as a young man with short silver-gray hair and blue-gray eyes. He wears a white top with red accents, red gloves and a red cravat. He has brown pants, white boots and a small gold crown on his head. When corrupted by darkness, his crown is very tall and he wears long black robes.

His animal form is a small silver-purple dog resembling a husky.

Three hundred years ago, Rolan was a gentle and kind person chosen to be a Hero of Light. After Mother Dragon's death, Rolan heart is filled with regret and loneliness. He then began to hate humankind.

Rolan is a Dragonier from Invidia. He is the son of its Chief and Rekoteh's brother. Three hundred years ago, the Crystal chose him as the Hero of Light to save the world from Chaos. Rolan sealed Chaos in the Star Chamber, but the Mother Dragon died filling him with regret and self-loathing. After the interference of Mammon in Invidia, Rolan's father desired to create an empire. He sent Rolan to Spelvia, alone, to train for this task. Rolan's sorrow made him vulnerable, and Lucifer entered his soul to corrupt him. The constant pleas for help from around the world, combined with Lucifer's influence, turned Rolan into a cruel and bitter person.

Years later, Aire and Yunita (themselves Heroes of Light) ask Rolan's aid in lifting the curse on the Kingdom of Horne, but Rolan refuses, saying humans are selfish and vile creatures who deserve to die, and the golems in Spelvia reflect his attitude by attacking humans on sight. Yunita and Aire venture into Rolan's Soul and meet the last fragment of Rolan that has not been corrupted, who asks for their help and joins the party. They defeat the pair of monsters that were infesting Rolan, but doing so releases the rest of the darkness inside of him. Brandt and Jusqua, also Heroes of Light, arrive in Spelvia with Rekoteh when Aire and Yunita leave Rolan's Soul. The heroes confront Rolan, who has now been completely corrupted. His appearance has changed, wearing all black with his crown growing to several feet high. He claims to hate humanity and though the fragment of good tries to warn the heroes, Rolan loses control and attacks.

After Rolan is defeated, Rekoteh goes to him, and they warn the party about the darkness. Now uncontained, the darkness is released unto the world, warping the timeline allowing the four heroes to go back in time and reenter Rolan's Soul to prevent Lucifer from corrupting him in the first place. In thanks, Rolan gives them the Sword of Light. When the party fights Louhi at the Witch's Mansion, Rolan arrives to help and convinces Louhi to negate the contract, which in the original timeline led into Horne being cursed. They reveal to the party that King Horne was turned into a parrot by the demon Satan, who is now assuming his form.

After defeating Satan, Brandt and the others go to Spelvia and meet with Rolan and Rekoteh. Rolan tells the party he will deal with the monsters while Brandt's group goes to the Star Chamber to defeat Chaos. After Chaos has been felled and darkness lifted from the world, the party goes to Spelvia and returns the Sword of Light to Rolan.

Rolan is equipped with a Shining Blade, a Wood Shield, and as with all guest party members, a unique armor; his is called Rolan's Clothes. During battle he uses a unique form of the Hero crown and has access to the Reckless ability. Rolan carries the Cure Tome and Thundara Tome in his inventory.

Rolan's starting stats when he joins the party.

Rolan is fought twice in the game. The first time is in Spelvia, after the darkness within him is released. Rolan and Rekoteh also appear as optional bosses in the Mysterious Lighthouse. 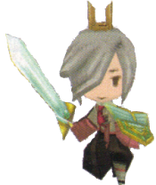 [view · edit · purge]The name "Roland" is a German name that means "famed throughout the land". This alludes to Rolan's role as the previous Hero of Light.