As the first hunt this battle is fairly easy, though the tomato's Flame Breath can deal good damage (but it will only use it once). After halving its HP, the Rogue Tomato will leap from the precipice and the player must finish it off on the lower ground. When it flees from the plateau, it counts as though the player killed it. This will break the battle chain (if there was one) and allows one to chain the Rogue Tomato with itself if they approach it without killing other enemies. This also allows the player to steal from the Rogue Tomato twice.

The Rogue Tomato has fangs in its PlayStation 2 bestiary entry, but the actual in-game model lacks them.

In the original Japanese version, the Rogue Tomato only rewarded LP once, rather than after each cutscene.

Rogue Tomato might be an allusion to Attack of the Killer Tomatoes, a 1978 musical black comedy horror film that is a spoof of B movies. Made on a budget of less than US$100,000, the story involves tomatoes becoming sentient and revolting against humanity. 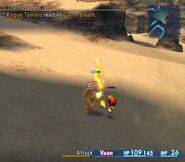