The Roegadyn are easily identified by their massive, muscular frames. They are descended from a maritime people that roamed the northern seas, though many of their ancestors turned their longships south to brave the crossing into Eorzean waters. Often considered a barbaric race, the fiercely competitive Roegadyn are also known for their compassion and unswerving loyalty. Many of the greatest warriors in history were born of Roegadyn stock.

The Roegadyn is a race from the seas north of Eorzea in Final Fantasy XIV. Its members are similar to the Galka of Final Fantasy XI, but lack a tail, and do not look as ursine. Most Roegadyn are of the Sea Wolf tribe, and live by the sea as fishermen, although some become mercenaries and/or pirates. Another tribe, the Lohengarde, also known as the Hellsguard, lives near a volcano believed to be the gate to hell, and use magic.

In the original game, only male Roegadyn were playable. Females were mentioned and shown in the 1.0 quests, such as Lihtdraega (mentioned in the Goldsmith quests) and Merlwyb, but since the relaunch, females have been fully playable.

The Roegadyn are a maritime people whose largest concentrations are found in the northern seas, by way of which they came to Eorzea.

They have enormous, muscular builds, and their culture emphasizes competition and unflinching courage, although tender, introspective individuals are also found. Roegadyn in and around the Limsa Lominsa area are typically seamen putting in at port, but many have settled permanently, becoming mercenaries, bodyguards, or even pirates by trade. Far away, deep in the mountains of Ul'dah, live mountain clans of reclusive Roegadyn known as the Hellsguard, said to have mastered the magical arts.

Female Roegadyn are playable in Realm Reborn. They have fierce faces and large muscular builds, not unlike their male kin, but they are sleeker. They are not as massive as male Roegadyn, and are a little shorter than their male counterparts (7'3" at max height for females and 7'5" for the males). Female Sea Wolf Roegadyn have fair skin (even more so than males) and are slim compared to Hellsguard women, while the latter have more robust physiques and brownish skin compared to male Hellsguard.

The Sea Wolves hail from the islands of the far north seas, where they subsist as fishermen and -women. Long ago, no vessel or coastal village was safe from their maritime brand of brutality. Now, it is not uncommon to see them employed as sailors or naval mercenaries on all manner of vessels.

In modern times, they make up a substantial portion of the population of Limsa Lominsa, nearly tying with Midlander Hyur as the largest demographic. The city has been substantially influenced by their culture and in many significant ways, Limsa is a "Sea Wolf town".

The Hellsguard are a clan of Roegadyn with body and mind tempered by the unforgiving heat of the volcanic regions they inhabit. Believing the mountains of flame to be gates to the underworld, their line has for centuries stood vigil over them to prevent the passage of souls back to the realm of the living. Their sheer girth and steely demeanor open a wide range of paths, from the martial to the monastic.

As they hail from the volcanoes of Abalathia's Spine, the Hellsguard have no city to call their own (and many Hellsguard seem to like it that way). If they are to be found in number in any city-state, it is in Ul'dah where there is no shortage of the sort of sell-sword work that many wandering Hellsguard engage in—and no shortage of coin with which to pay them.

A non-playable variant, Roegadyn native to the continent of Othard can differ greatly from their western cousins. While retaining their massive stature and build, Othardian Roegadyn have can skin tones similar to a Hyur, and may lack the flattened nose of other Roegadyn. Othardian Roegadyn may thus look like oversized Hyurs, as seen with Gosetsu Daito. This is not universal, and other Othardian Roegadyn like Rasho can look much like their Eorzean cousins.

Sea Wolves use words taken from the Roegadyn language, while Hellsguard adapt the names to use common Eorzean words. Othardian Roegadyn use names inspired by real life East Asia.

The following table shows the attribute modifiers for Roegadyns. These are flat modifiers and do not scale with level, only making a noticeable difference at low levels and very quickly becoming negligible as these attributes climb into the hundreds and thousands.

Upon completing the Adventurer from Another World collaboration quest the player gets the Glamour Prism: Roegadyn attire for Gladiolus Amicitia, giving him the look of a Roegadyn from Eorzea. The attire shows him with leg tattoos; however, he doesn't have the tattoos in other attires.

The two kinds of Roegadyn (Sea Wolves and Hellsguard) correspond to the frost giants and fire giants of Norse mythology. 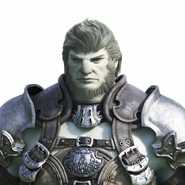 Sea Wolf bust; used as the basis for the "signature" Roegadyn in major cinematics. 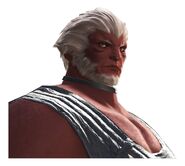 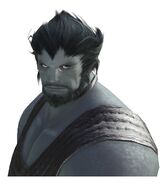 The "CG Roegadyn" in the opening FMV.

The "CG Roegadyn" as a Paladin.