This rod purges doubt from those it touches, turning them into pillars of faith.

Rod of Faith (フェイスロッド, Feisu Roddo?), also known as Faith Rod, is a recurring weapon in the series. It is a powerful rod that often bestows the Faith status either to the user automatically or to a target through attacking with it.

The Rod of Faith is the most powerful rod, providing 24 Attack, 6 Evade, +35 MP, +3 Magick Power, 33 CT, grants Faith to a target at a 60% chance, requires the Rod of Faith License to equip, and having the same damage formula as guns and measures. It can be obtained on Mt Bur-Omisace after completing the Behemoth King Hunt.

In the Zodiac versions, it now provides 21 Attack, 6 Evade, +6 Magick Power, 33 CT, has a 60% chance of granting Faith to a target, and requires the Rod of Faith License for 130 LP. It can be found as a treasure in Cerobi Steppe (The Terraced Bank), in Mt Bur-Omisace after the Behemoth King hunt, and uncommonly stolen Exodus in Trial Mode Stage 68.

Rod of Faith is the third strongest rod (originally the strongest in the PlayStation version), providing 5 Attack, 20% Weapon Defense, granting Faith to the user while equipped, and bestowing Faith to a target when attacking with it. It can be found as treasure in Midlight's Deep. 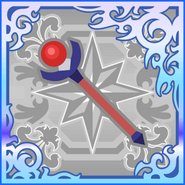