Cid Pollendina: Oh, shut up and help me remodel the Rocket Town page!
Please expand this article into a full one. The following tasks need to be completed:

Rocket Town is a town in the Rocket Launch Pad Area in Final Fantasy VII built around the launch site of the Shinra No. 26 rocket, part of Shinra Electric Power Company's space program. Cid Highwind lives and works here. The town also features in Before Crisis -Final Fantasy VII- prequel.

Several years ago the place was bustling with scientists due to the world's first rocket launch to outer space on the rocket Shinra No. 26. After Shera, one of the engineers working on the rocket, noticed a leak in one of the oxygen tanks, she stayed behind to fix it while the rocket was about to launch. This forced Cid to abort the launch, crashing and damaging the rocket. Shinra abandoned the space project and Cid would blame the failure of his dreams on Shera and so treats her poorly. The scientists and mechanics on the project established a settlement nearby, their determination and hopes of the project undeterred for its revival, and chose Cid as the town's representative.

Episode 15 of Before Crisis -Final Fantasy VII- claims AVALANCHE sabotaged the rocket's engines and reveals Rufus Shinra, the vice president of Shinra, was the one who recommended the Space Program's cancellation, with the support of the entire Shinra Executive Staff.

Years later, Cloud Strife and his party come to Rocket Town in search of Sephiroth. They meet with Cid and learn Rufus Shinra, now president of the company, has come to Rocket Town. This fills Cid with hope the space program will be restarted, but Rufus only wants Cid's airplane, the Tiny Bronco. Cid betrays Shinra and fights his boss Palmer along with Cloud and the party. They use the Tiny Bronco to escape, but it is damaged, and after crashing in the sea can only be used as a crude boat.

Once Sephiroth has unleashed the Meteor onto the Planet the party fights with Shinra over the Huge Materia Shinra plans to launch with Cid's rocket into space, right into the Meteor in hopes of destroying it. Cloud and his party desire the Huge Materia to fight Sephiroth and they fight through the Turk Rude and enter the rocket's control room. Palmer gleefully tells them over radio the rocket is sent to automatic launch, and launches the party into outer space with the rocket.

The party evacuates on an escape pod and Shinra No. 26 crashes into Meteor and creates a blinding explosion, but the Meteor is unaffected. Rocket Town is left without its landmark.

Rocket Town is located to the North-West on Gaia's Western continent.

The couple of people who live at the house talk of being bored and desiring excitement. The residents are absent from the house and found at the base of the rocket for the Huge Materia event in Part 2 to see the excitement. After this event they return to their previous positions, and the woman comments on how he has bored now the excitement is over, and the man comments on how the launch was not too exciting.

The person living here claims its his job to make people over the world laugh. During the Huge Materia quest, if Cid is in the party he makes puns that hint at the goings on at the rocket including Rude's presence, Rufus's gathering of mechanics, and launching the rocket when loaded with Materia. The party do not enjoy the puns, and Cid kicks the "comedian" during this scene.

In the kitchen at the lower part of the house is a chest with a Power Source item.

The inn is referred to as "Shanghai Inn" in the menu and dialogue, though the sign at the bar counter reads "Shanhai-tei" in capital English characters, the romanization of the Japanese. The Japanese name is written on a hanging sign outside the inn, which also has "Inn" written on in English.

This area becomes completely inaccessible after the launch.

The access platform is a path that leads to the door of the Shinra No. 26. The door is locked previous to talking to Cid, and at all times between the Northern Cave visit in Part 2 and the Huge Materia event. The door leads into one of the rocket's hallways.

The ladder down from the access platform leads down the base of the rocket's launching pad.

Rude and two of his soldiers are fought on the platform during the Huge Materia event.

"The Oppressed" from Final Fantasy VII

When visited on disc 2 after Meteor is summoned, "On The Edge of Despair" plays.

Yusuke Naora, the art director for Final Fantasy VII, has commented on working on the game thusly:

And even after I stopped working, my boss was still making stuff. On one of the posters hanging on the wall, he added an image of Hironobu Sakaguchi. (laughs) I should be upfront: there's many graphics that even I don't know about hidden away in the game. Be sure to look closely at the walls inside the buildings. Who knows what surprising things you might discover. The Rocket Town especially has a variety of interesting things hidden away.

For example, there is a Thompson Sub-machine Gun and a lot of AK-47/Kalashnikov in the weapon shop. Another AK-47 is found in Cid's house.

When first speaking to Cid he will tell the party that the Shinra No. 26 tilts a little more every day. However, in the flashback, during the transition between the rocket tilting and present day, the rocket does not appear to have moved at all.

If Cid is not in the party when approaching the Shinra No. 26, he will forcibly enter it. 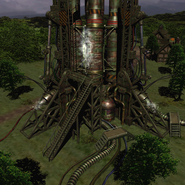 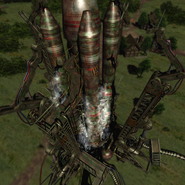 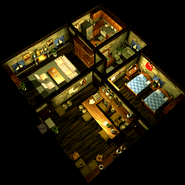 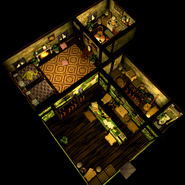 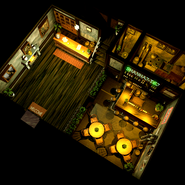 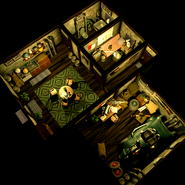 Rocket Town in an FMV. 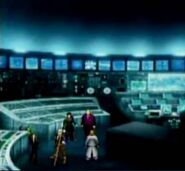 Rocket launch control in Before Crisis.