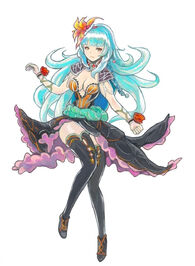 Rocbouquet (ロックブーケ, Rokkubūke?) is one of the main antagonists from the Super Famicom game Romancing SaGa 2. She has also appeared in the Final Fantasy series and related titles in multiple forms.

Rocbouquet appeared as a dark-elemental unit as part of the Emperor SaGa crossover event. Her job was Seven Heroes and given a unique race called Demigod. Her default unit attack was Horror and her special ability was Temptation.

Rocbouquet appears as a non-elemental summon. She can be obtained as a summon through the summon drawing shop.

Rocbouquet's special attack is Temptation, which inflicts poison, blind, silence, and slow to all enemies for five turns. Summoning Rocbouquet costs 2 points from the consumption gauge. Rocbouquet's Phantom Stone is an SSS rank summon and she has a summon cost of 18 to equip to a character.

Her artwork was done by freelance artist Mineji Sakamoto.

The summon allows the wielder to use the following abilities depending on the summon's rank:

The following are bonus abilities granted to characters equipped with Rocbouquet. 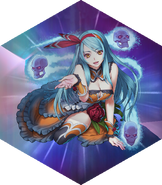 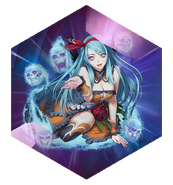 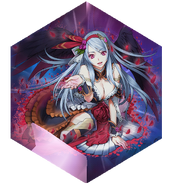 Rocbouquet appears as a boss as part of the Romancing SaGa 2 crossover event. Her sprite is reused from the original Super Famicom version of Romancing SaGa 2. In addition, Rocbouquet also appears in the final boss fusion form of the Seven Heroes.

Rocbouquet, along with the other Seven Heroes, appears as a boss as part of the Imperial SaGa crossover event. Her enemy sprite is taken from Imperial SaGa and the remake of Romancing SaGa 2.