Inori Minase
Roca is one of the protagonists of the third season of Final Fantasy Brave Exvius. She is the reincarnation of Dark Fina following the events of the second season. She initially appears as an infant but grows older as Fina and the Hollow Breakers travel the Farplane and close The Hollow's wormholes in different worlds, ultimately revealing the true purpose of her existence.

Roca first appears as a baby protected by a magic barrier at all times who can float. Roca as a child has orange hair and wears a black onion knight helmet with a white star and a black and white dress with white stars. She walks barefoot.

As a grown up, she has blonde hair like Fina and wears the time mage attire of a red, white, and purple dress with star, white collar, red shoes and a star-shaped brooch. She wears a purple veil and a white lily on the back of her head. As shown by her art, her weapon of choice is a dual purpose sword that can be used as a rod while the blade is sheathed, with a golden star at the tip of the handle.

As a baby Roca becomes attached to the Hollow Breakers as they care for her, although she displays some reservation towards Rinora. As she grows into a child, Roca acts her age, mischievous, rebellious, loud, selfish, and hyperactive. Although she generally means well, her childish nature gets her and others in trouble, for which she is scolded for and feels bad about, slowly growing more responsible. Regardless, she's loyal to Fina and loves her the most out of the group.

When fully grown, Roca is more assertive, confident, independent, and courageous. She behaves more like a proper adult, thinking things through and being more brave and resolute. She still remains whimsical and impulsive, saving a wandering Golden Bomb on a whim and making it her pet and named it Boomer.

Following Dark Fina's demise during the battle against Vlad, Roca was born as a means to fill in the gap created by the imbalance between the Will of Light and the Will of Oblivion. With the Hollow going out of control to rampage worlds, Roca appeared to Fina and Bruce after they closed one of the wormholes in Wohlstok. The Will of Light entrusted them to take care of her and to bring Roca to her. Fina grew attached to her, and the baby remained in the party's company as she could protect herself with a powerful barrier and float, and generally disliked the idea of being left alone with Rinora. 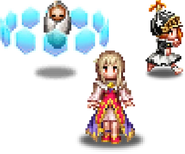 Concept art of Roca as a child. 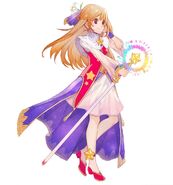 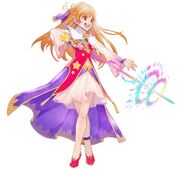 Concept art of an older Roca