Detects by Sight
List of Roc Enemies
Rocs are some of the largest and deadliest birds in Vana'diel. With high evasion and a number of multi-hit attacks, Rocs can evade what aggressors throw at them and then counter with a relentless blow of attacks. Even the most prepared and experienced forces should be wary.

Rocs can drop feathers and plumes when defeated. The feathers are used in a few recipes, most notably the highly-prized Icarus Wing. The plume is sought after by weavers, tanners, and carpenters. The plumes can also fetch a decent price with certain merchants.

The meat of the Diatryma variety of Roc, found only in Eastern Altepa Desert and Misareaux Coast, can also be scavenged from the defeated bird. The meat is distasteful to most occupants of Vana'diel, but it can be used in a soup edible to Za'Dha Adamantking and used to spawn a notorious bugard. 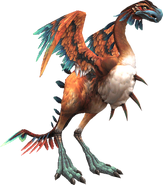 Concept art
Add a photo to this gallery

[view · edit · purge]A roc or ruk (from the Arabic and Persian رخ rokh, asserted by Louis Charles Casartelli to be an abbreviated form of Persian simurgh) is an enormous legendary bird of prey, often said to be white.

One of the species is Suzaku. [view · edit · purge]The Vermilion Bird is one of the Four Symbols of the Chinese constellations. According to Wu Xing, the Taoist five-elemental system, it represents the fire-element, the direction south, and the season summer, correspondingly. Thus it is sometimes called the Vermilion Bird of the South.

It is known as Zhuque (Joo-choo-eh) in Chinese, Suzaku in Japanese, Jujak in Korean, and Chutước in Vietnamese. It is described as a red bird that resembles a pheasant (also dubbed as either a sparrow or a peafowl) with a five-colored plumage and is perpetually covered in flames, though it is not to be confused for a phoenix.