Final Fantasy Wiki
Register
Don't have an account?
Sign In
Advertisement
in: Races in the Legend series

Various
Robot is one of the main character types or classes in Final Fantasy Legend series.

Robots serve as non-player characters in this game.

Robots are innately immune to Paralysis and Poison, and improve based on the equipment they have. Armor will raise their HP and boost their Defense. The gain is not necessarily the normal value a human or mutant would gain from wearing it. They can also wear multiples of the same slot (helmet, etc). Armor impacts Robots differently than other party members, but immunities are gained as normal: generally, all items in a single line raise Defense by the same value (e.g. all Silver equipment raises Defense by 6, instead of Gloves raising by 2 and Armor by 7), so it is often more cost-effective to wear multiple Gloves instead of any Armor. Robots also gain defense from Shields, where other party members do not.

Weapons will increase their Strength and/or Agility. Robots cannot boost mana. This means they take the most damage from and are healed the least by magic. There are a handful of enemy attacks that specifically target Robots. Weapons equipped on Robots are restored at Inns. There is a catch though: weapons equipped to or from a robot have their usage cut in half (a sword with 50 uses is reduced to 25 on a robot, and 12 if it is removed from the Robot).

Robots appear as minor enemies in this game as well, but they will never drop Meat and are not available for player transformation. These enemies are often armed with guns, making them particularly dangerous to the party. Dunatis and WarMach are both notable Robot bosses.

Robots are one of the six classes available. A character can become a Robot when installing Parts into a player character that has already been transformed into a Cyborg. Like the other transforming classes, the Robot gains Talents (enemy abilities) and gains Resistances and/or Weaknesses of the actual enemy creature they transformed into.

Unlike the other transformation classes, the Robot's stats are only loosely based on the robots they resemble, and must be upgraded by buying Robotic Parts or capsules at an Item Shops located in the towns. The ability to gain stats based on equipment has been moved to the Cyborg class in this game. As such, a Robot's means of improving its stats more strongly resemble humans from the original Final Fantasy Legend than the Robots of the previous game because it relies entirely on "bought" statistics, a Robot's level is used only to determine its transformation to other robots when installing new parts.

Unlike some of the other classes, Robots do not automatically change form as they gain levels, allowing a player to select a robot with good Talents and Resistances and simply stay in that form. They may change form to other Robots by installing further Parts. If the Robot changes back to a Cyborg, either via eating Meat or by using Flushex unit, the Robot's upgrades will be permanently lost.

Robots have 0 MP and a low Magic statistic that cannot be raised, making them extremely vulnerable to magic, but their ability to effectively pay for stats above and beyond the displayed limits (> 99 stats, > 999 HP) makes them the second strongest class in the late game, losing to the Human and Mutant classes. 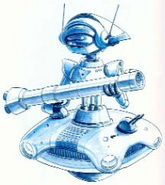