Robel-Akbel (ロベルアクベル, Roberu Akuberu?) is a non-playable character from Final Fantasy XI. The Warlock Warlord of Windurst during the Crystal War, he is a dark, humorless military commander, with his face covered in black bandages, revealing only bloodshot eyes. He is a prominent character in the Windurst branch of the Wings of the Goddess storyline.

A deeply private man, he only confides with his adviser Lehko Habhoka, and generally only meets with others for military briefings. He possesses extreme magical capabilities on the battlefield, able to wipe out a battalion of beastmen with a single spell. 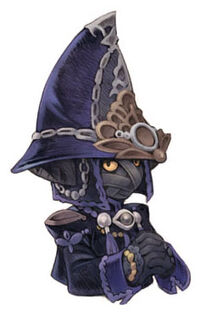 What no one else knew was that the real Robel-Akbel died in the First Battle of Windurst. The "Robel-Akbel" seen in-game is actually Karaha-Baruha from an alternate timeline, where he failed to summon Fenrir and Windurst was razed by the beastmen. Bitter at this failure and the death of the Star Sybil in that timeline, he went back through the Maws and assumed the identity of "Robel-Akbel" and continued his work as the Warlock Warlord. The real Robel-Akbel's reclusive nature and facial bandages made this deception simple. After Fort Karugo-Narugo was damaged by the Beastmen Confederate, the time for summoning drew near.

Intending to ensure the summoning would be a success, he planned to assist Karaha-Baruha with his own magic. Karuha had deduced the truth about "Robel-Akbel" (as well as the player), and gladly accepted the offer. As a horde of Yagudo and demons besieged Windurst, the summoning began. Releasing the full power of Fenrir on the invaders, the Great Beast thoroughly demolished the beastmen army, sending them into retreat.

As Fenrir was ready to confront Tzee Xicu the Manifest, Karaha and "Robel" started losing control and became absorbed by Fenrir. Lehko tried to use the Bow of Light to shoot down Tzee Xicu, but was stopped by Perih Vashai. As a result, the Manifest retreated with her fleeing army, bidding Fenrir to follow for their final showdown at Oztroja.

With Lehko Habhoka as acting commander, he dispatched the Mithran Mercenaries to organize a counterstrike at Oztroja.