Using road transportation is an optional method of travel across the world of Final Fantasy VIII, mainly used until the party obtains either the mobile Garden or Ragnarok.

The first instance of road transportation use is when the Balamb Garden students are transported to Balamb Town via SeeD Personal Carrier Vehicles. In Deling City the player can navigate the city by taking a free bus ride. During the assassination attempt upon Sorceress Edea, Squall hijacks a blue Tempest car, and during the escape from D-District Prison the party acquires two Galbadian APCs. Galbadian motorcycles are seen during the Battle of the Gardens and Laguna Loire is seen using a variety of transports in the dream sequences.

Squall Leonhart's party can rent out cars from towns in the Balamb, Galbadian and Estharian continents.

Renting a car is the best way to avoid those nasty monsters outside the city. You'll need to buy fuel of course. When you rent a car, we offer a full tank, free of charge. You can buy extra fuel from item shops. We charge a flat rate for our rentals. As soon as you drive back into the city, your rental period ends, so make sure you get the most out of it.

When using road transportation on the world map, the player will move faster (accumulating more "steps" and thus resulting in being paid more frequently) and experience no monster encounters. Cars require fuel to run at normal speed, and once all fuel is consumed, the car will travel slowly. Renting a car costs 3,500 gil, and fuel costs 3,000 gil per unit. Fuel can be bought from the shops around the world, and a rented car always starts with one unit of fuel.

The car rental locations are:

Cars come in a variety of shapes and models. Accessible to the player via the town/city rental services (see below), cars and trucks can also be seen around towns and cities being used by NPCs. SeeD Personal Carrier Vehicle is used by Balamb Garden for transporting SeeD members and SeeD cadets.

A green pickup truck model and backgrounds featuring it have been unearthed from the game code by players. It appeared to have belonged to Laguna Loire during his stay in Winhill, but this car does not feature in the game; the only vestige of its existence is that the Artisan in Shumi Village shows a model he's made of it to Squall's party if spoken to.

The Tempest is a light blue convertible Cadillac Squall "acquires" during the assassination attempt on Sorceress Edea. The Tempest would appear in Squall's possession again in Chocobo Racing.

A yellow vehicle with a passenger compartment is used by the party to go to the SeeD exam. Seifer Almasy later leaves the docks with the vehicle without the rest of his squad. Martine uses one of these vehicles to arrive to his meeting with the party at Galbadia Garden.

Armored Personnel Carriers are used frequently by military forces to transport personnel to locations. Galbadian forces use them to transport troops. Laguna and his friends use one to leave the blazing Timber forests for Deling City. The party leaves the D-District Prison in two APCs of different models, and later split for their respective missions; Squall's party leaves their APC at the Dingo Desert Station whereas Selphie's team leaves theirs at the Missile Base. The APCs are also used to block paths the player can't take, such as on the world map when Selphie's team is to go to the Missile Base, and in Balamb during its occupation by the G-Forces when the player is prevented from leaving or entering at will.

Used as a public transportation system, the bus service in Deling City allows the player to travel from one end of the city to the other relatively quickly without interference from surrounding obstacles. The buses can be boarded for free simply by talking to a conductor near a relevant bus stop.

Unused text entries in the game data suggest there was once a plan for the player to be able to choose a location, but instead the bus goes around the city and the player decides when to get off.

Galbadian soldiers ride motorcycles in the Battle of the Gardens, driving them off ramps to launch onto Balamb Garden from Galbadia Garden. To assist them, the Galbadian motorcycles have rockets strapped to their rear wheels to help propel them. The ramps which they drive off likely have some method of launching the motorcycles as well.

Chocobos can be used to travel on the world map on the continents that have no car rentals. Chocobos are free, but require the player to solve a puzzle in a chocobo forest first.

The player may rent a car to travel on the world map. Every town has a different looking car to rent. 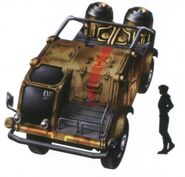 Driving the APC on the world map. 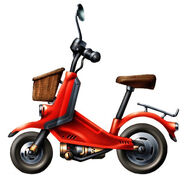