Rise of the White Raven 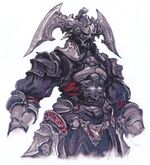 "Rise of the White Raven"

"Rise of the White Raven" (白銀の凶鳥、飛翔せり, Hakugin no Kyōchō, Hishō seri?, lit. Silver Wicked Bird, Soaring) is the final boss theme of the original Final Fantasy XIV. It was composed by Masayoshi Soken, with the lyrics written by Michael-Christopher Koji Fox and Eva Kappeller and the vocals by Music Creation.

In the original Final Fantasy XIV, "Rise of the White Raven" is the final boss theme, played once the player character and his or her party enter the second stage of the final battle with the main antagonist Nael van Darnus, who has now transformed into Nael deus Darnus after taking in too much of Dalamud's power.

The piece begins set in C minor, featuring a heavy amount of strings, vocals, and a harp solo in its opening. The ethereal mood evoked by the choral notes and the harp solo could possibly represent Nael's loss of sanity and her rise to full power due to Dalamud boosting her power. The piece then transitions into a brass fanfare of short, crisp notes.

In A Realm Reborn, an instrumental version called "Bite of the Black Wolf" plays during several Legatus battles, such the first stage of the final battle of the main story quest line when facing Gaius van Baelsar in the bottom of The Praetorium. "Rise of the White Raven" is again played in full during the rematch with Nael deus Darnus, who serves as the final boss of The Second Coil of Bahamut. An orchestral version can be heard in the Cinder Drift when the party fights the true form of the Ruby Weapon.

Through crafting, players can adquire the "Rise of the White Raven" music theme for the Orchestrion. An orchestral version of the theme is also available in Mog Station.

The words "hear", "feel", and "think", which are heard in the main theme after character creation, are faintly spoken during the first stanza.

Soken's piece is featured as the seventh track of the album.