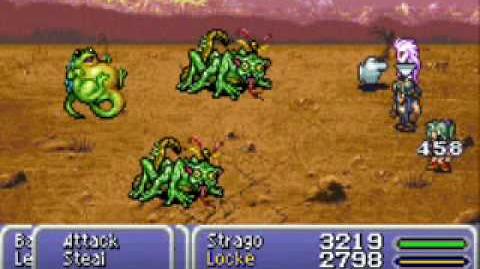 The Rippler bug is a bug in Final Fantasy VI. It has been fixed in the iOS/Android/Steam version. The Lore Rippler has the effect of exchanging statuses between the caster and the target. It is normally supposed to only exchange Blind, Zombie, Poison, Invisible, Imp, Doom, Image, Silence, Berserk, Confuse, Sap, Sleep, Regen, Slow, Haste, Stop, Shell, Protect, Reflect, Reraise, and Float.

The bug is that Rippler affects all statuses, even the "not named in-game" ones which are not meant to. Rippler is not supposed to affect Magitek, Petrify, KO, Critical, Dance, Rage, Frozen, Trance, Chanting, Hidden, or Interceptor Guard, but does anyway.

This means that Shadow can lose Interceptor permanently, and any character can use a Desperation Attack even if their HP is not critical. There is a bugfix patch that the player can use to fix it on the SNES version.

A second bug is that Rippler always hits, even when it claims to miss. This secondary bug was fixed in Final Fantasy VI Advance. However, a new second Rippler bug was created: if a character or enemy has immunity to the Imp status, it also causes immunity to being affected by Rippler.