Exchanges an enemy's status effects with those of the caster.

Rippler (波紋, Hamon?, lit. Ripple) is a recurring ability in the series.

Rippler is a Lore ability that exchanges all statuses of the user with the statuses of the target. It was intended to affect the statuses Darkness, Zombie, Poison, Invisible, Imp, Doom, Image, Silence, Berserk, Confuse, Sap, Sleep, Regen, Slow, Haste, Stop, Shell, Protect, Reflect, Reraise, and Float. However, due to the Rippler bug, it also affects multiple conditions and mechanics not meant to be treated as status effects, such as Interceptor Guard.

It can copy the status effects from relics, such as Miracle Shoes, but the wearer of the relic does not lose the status due to it being permanent on the character. The player can still dispel the enemy who used Rippler to remove the statuses they gain from the relic(s), as they are not permanent on them.

This Lore can be learned from the Blue Dragon, Dark Force, Gigantoad and Leap Frog. It costs 66 MP to cast and has a hit rate of 111, but will miss targets that are immune to the Imp status. 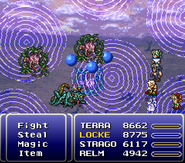 A capillary wave is a wave traveling along the phase boundary of a fluid, whose dynamics and phase velocity are dominated by the effects of surface tension. Capillary waves are common in nature, and are often referred to as ripples.