The home to Grand Duke Barrington, liege lord of Fovoham, this castle is distinguished by its Romandan-style towers.

Riovanes Castle (リオファネス城, Riofanesu-jou?) is the stronghold of Grand Duke Barrington in Final Fantasy Tactics. It is the site of Ramza Beoulve's battle with Wiegraf, who then transforms into Belias during a Lucavi attack on the castle in which Hashmal goes on a rampage, killing many of the castle's defenders. Barrington himself escapes the carnage, only to be thrown off the roof of his own castle by the Ultima Demon Lettie disguised as a human girl, who was in the service of the Lucavi Zalera, who had possessed Marquis Elmdor of Limberry.

Riovanes Castle is the second area to have Chain battles. Here in this castle, three different chain battles are fought. It is also necessary to build up a stock of items and armor before going into this castle.

Inside of Riovanes Castle, as shown in a cutscene.

The site of the battle for the gate.

The steps where Ramza fights Weigraf. 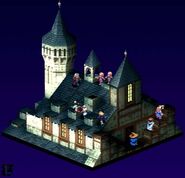 The roof of the castle.
Final Fantasy Tactics setting
Community content is available under CC-BY-SA unless otherwise noted.
Advertisement