Rebelling against her father, a powerful figure in the Galbadian military, Rinoa joined the Timber resistance group known as the Forest Owls. She met Squall at the SeeD graduation party and fell in love.

Rinoa is a playable character in Final Fantasy Record Keeper who was first unlocked in Parade Float on Classic difficulty during the To Slay a Sorceress Challenge Event as the First Time Reward. She was also offered upon completion of the Bonus Quest, "Complete Balamb Garden 1 Elite (VIII)", and was later reissued in Broken Chains and Rains of Ruin. She occasionally appears fused with Adel as a boss.

The first dedicated Black Mage and Summoner from her delegation, Rinoa focuses her Soul Break skills on multi-hit and area-of-effect attacks; and in so doing can be a devastating force in battle. She is slightly faster than her mentor in Edea; yet despite having higher HP, Rinoa lacks Defense and Resistance. Even so, she has a diverse skillset that can help her party in a pinch.

After Rinoa's level cap is increased she automatically gains the Record Materia, Angelo Recover, which when equipped grants the user with a chance to recover HP from normal attacks.

She can equip the following armor types: hats, robes, light armor and bracers.

Japanese event banner for To Slay a Sorceress.

Japanese event banner for To Slay a Sorceress (Reissue).

Global event banner for To Slay a Sorceress.

Global event banner for To Slay a Sorceress (Reissue). 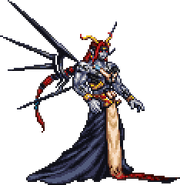