In the original demo of Final Fantasy VIII, Rinoa is part of the team that infiltrates Dollet and is featured in Selphie's place in the evacuation FMV. She has no Limit Break, and no spoken lines, but is the only one able to summon a Guardian Force, Leviathan.

Squall and Rinoa appear in a technical demo for the PlayStation 2 where they reenact the waltz scene from Final Fantasy VIII to showcase the console's graphics engine.

An icon sprite of Rinoa appears in the Pocket Station memorycard file manager.

As a part of the Forest Owls, Rinoa works to undermine the Galbadian government along with her fellow freedom fighters. She meets Squall when she goes to Balamb Garden to seek help for her group's plans to abduct the Galbadian president. She cannot help falling for the SeeD, yet she will find herself the unwitting inheritor of a sorceress's power, making her a liability and putting her life at risk during the war against the sorceresses.

Rinoa appears as a playable character in the iOS version, and must be purchased to use.

Rinoa is part of the background movie in the Event Music Sequence, "Waltz for the Moon", dancing with Squall.

Rinoa's life changed forever when she sided with Timber, but she strives onward with her optimism intact. Cruel trials await her as she is dragged from one war to another, crying out endlessly for her knight to rescue her...

Rinoa is an unlockable character, and is unlocked by collecting Turquoise Crystal Shards.

She is a Support oriented character. Her Limit, Wishing Star, deals damage in proportion to her Magic and Agility. 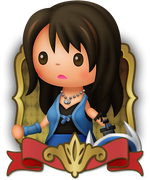 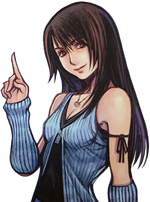 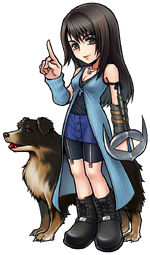 Rinoa appears as a playable character.

Rebelled against her Galbadian military father to join the Timber resistance group, The Forest Owls. A cheerful and carefree young woman who falls in love with Squall.

This vibrant young member of the Forest Owls is extremely moody after waking up.

Rinoa is an exclusive character only available from the Premium Character Shop as a random downloadable content. She uses the Angelo Cannon ability during battle.

Rinoa is a playable character who was first unlocked in Parade Float on Classic difficulty during the To Slay a Sorceress Challenge Event as the First Time Reward. She was also offered upon completion of the Bonus Quest, "Complete Balamb Garden 1 Elite (VIII)", and was later reissued in Broken Chains and Rains of Ruin. She occasionally appears fused with Adel as a boss.

Rinoa is a character and summonable vision. She retains her original appearance. She serves as a character representative from Final Fantasy VIII. 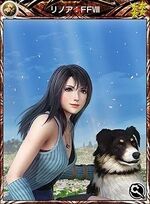 Rinoa appears on a battle card during the Final Fantasy VIII crossover campaign. Her default outfit from Final Fantasy VIII also appears as an alternate dress for the player's Echo. In this attire, the Echo resembles Rinoa in her duster cape and denim suit, complete with angel feather wings.

Rinoa is represented on several cards of the Wind set.

During the end credits of Kingdom Hearts II, Squall (going by the name Leon) receives a letter from someone, presumably Rinoa, as her trademark "angel wings" icon appears from the letter.

Rinoa, along with other Squaresoft characters from the Final Fantasy and Dragon Quest series, appears in Itadaki Street Special, a game that resembles Monopoly. It has only been released in Japan.

Rinoa reappears in this mobile-phone edition of Dragon Quest & Final Fantasy in Itadaki Street Mobile. While initially not part of the player roster, she was later added on August 16, 2010, following the game's release.

Rinoa appeared as part of the Final Fantasy collaboration. The collaboration event happened in the North American version from 2 to 15 November, 2015. Rinoa's first form features Angelo and her final evolution depicts her as a sorceress with angel wings.