Relm: I couldn't miss the chance to practice my drawing!
This article is in need of a few pictures. Perhaps you can help by uploading a picture of Rinoa's abilities.

Rinoa's default outfit, "Forest Owl", is her original attire from Final Fantasy VIII. She wears a light blue, sleeveless duster sweater with white angel wings on the back, and matching arm warmers. She wears a black tank top under the duster, cycling shorts with white zippers, laced boots, and a ribbon on her left arm. She wears a denim blue buttoned miniskirt over her black shorts, and her signature necklace with two rings. This outfit has two alternate colorations. One is similar to the Garden students, and recolors her sweater and the zipper on her shorts black, her arm warmers gray, her tank top white, and gives her miniskirt a tartan pattern with red and black. The second retains the black zippers, and recolors her miniskirt into blue-gray, and recolors her sweater, arm warmers, and boots white.

Her first alternate costume is the "Party Dress", which is what she wears in cutscenes during the SeeD inauguration ball. She wears an off-white halter dress with her signature necklace, along with matching heeled dancing shoes, and a bracelet on her right wrist. In the first alternate coloration her dress and heeled shoes are black, while the second gives her dress a cream yellow color and her heeled shoes a silver color with added luster.

Her second alternate costume is "Wings of Love", which is based on what she wears in an Amano artwork.

Wings of Love I.

Wings of Love III.
Add a photo to this gallery

Rinoa retains most of her personality from her original game: upbeat but afraid of being alone. She worries for Yuna when the summoner tires from on their way to Materia's Tower. Knowing that Yuna wouldn't want to drag others nor voice her concerns, Rinoa asks Locke if they can take a break, something Yuna is grateful for.

Based on Yuna's experience as a former champion of Cosmos, Rinoa hears stories about the previous cycles and looks forward in meeting the others. She fears being alone, thanking Locke and Yuna for finding her since she would have lost all hope if she's left by herself in a foreign world.

Rinoa equips long-ranged projectiles named Blaster Edges, mounted and shot from her left wrist. One of her Limit Breaks involves her pet Angelo being used as a projectile. During her EX Skill, she gains an alternate moveset involving sorceress magic, and her Blaster Edge disappears until after she uses an HP Attack or when the EX Skill ends. The Blaster Edges are featured in the Weapons Monthly magazines as customizable models, and can be used by Rinoa in Final Fantasy VIII. 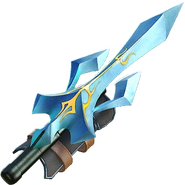 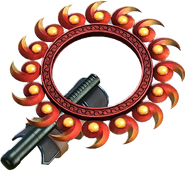 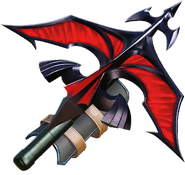 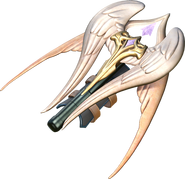 Rinoa's Seraphic Heart.
Add a photo to this gallery

Rinoa can throw the blade from her blaster edge on her opponent once or thrice. She can duplicate her weapon to hit her opponent multiple times and use magic in a similar manner as Terra Branford as her HP attacks. She uses both of her Limit Breaks from Final Fantasy VIII: Combine and Angel Wing. Some of her Combine moves serve as her Bravery attacks to knock her opponent using Angelo. In her Angel Wing mode as her EX Skill, she hits her opponent with offensive magic before it wears off. Like Lightning, she is able to switch between both of her Limit Breaks in either physical or magical Bravery attacks.

In Combine mode, when Rinoa takes a certain amount of damage, Angelo will appear and cast Angelo Recover. Angelo will disappear immediately after she finishes an attack or Rinoa enters Angel Wing mode.

Prior to her reveal, game director Takeo Kujiraoka expressed interest in seeing a character who would make use of a partner, citing Rinoa and Angelo as an example.[1]

Rinoa is voiced by Skyler Davenport in the English version. Rinoa speaks in a normal voice with a childish tone, but in her Angel Wing form she speaks in a serious but icy tone.

She is voiced by Kana Hanazawa in the Japanese version who also voices Deuce in Final Fantasy Type-0 and Enna Kros and Boko in World of Final Fantasy. 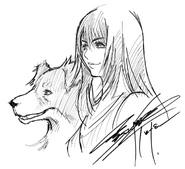 Sketch for the reveal of Rinoa.
Add a photo to this gallery