Combine with Angelo and Angel Wing

Shooting Star
Rinoa is a playable party member in Final Fantasy VIII who also appears as a part of a boss battle late into the game. She wields Blaster Edges in battle, blades shot from a device on her arm. She is supported by her dog, Angelo, and has two Limit Breaks: Combine (with Angelo) and Angel Wing. Rinoa also appears as a Triple Triad card. She is briefly the party leader during a segment in Deling City.

Rinoa joins the party at the mission in Timber. She is met in the Forest Owls' Base, where the player gets the chance to rename her and Angelo. She stays with the party from then on until the end of the parade in Deling City, where she is initially not with the others in the D-District Prison.

She is absent for majority of Disc 3; she is absent from the party for the portions where the party is to visit Edea's House, White SeeD Ship, and the locations in Esthar. She briefly returns to the party when the party boards their airship, but after landing, she is out of the party until the events at the Sorceress Memorial. Defeating the boss at the top of Lunatic Pandora marks the point of no return; Rinoa is again gone from the party and he player can't return to the world map, but the player gets her back by defeating the next boss.

Perhaps because she is not always available and thus misses out on EXP gained during these times, Rinoa has generally better stats than other party members (however, character levels mainly affect enemy stats, as the party's own stats can be customized with the junction system).

Rinoa briefly acts as the party leader in Deling City. The player only needs to navigate her across some boxes and other obstacles to the roof of the Presidential Palace to start a scene, but they can take a detour to the Deling City Sewers to find a Weapons Monthly magazine down there.

Rinoa's junctions and level are never used for Laguna's party during dreams. Her intro pose is to stare at the enemy with her arm on her hip before stroking her hair to the side. Her victory pose is to jump with her hands in the air, then turn around while flipping her hair. 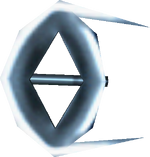 Rinoa uses a Blaster Edge in battle. Through upgrades via junk shop, she can come to wield five other variant models. The Blaster Edge, which is attached to her left forearm, does not appear in her character models outside of battle.

While it is possible to acquire Rinoa's ultimate weapon, Shooting Star, before going to Esthar, it is difficult due to the player requiring a Force Armlet to upgrade. However, Rinoa's weaponry is not a priority to upgrade, as they only offer better stats, which are much more readily boosted via the junction system than weapon upgrades.

Rinoa's Blaster Edge might have been inspired by similar weapons found in Rudra no Hihō on the Super Famicom, a game that was release by Square in 1996. In that game, these weapons are mounted on the arm and shoot a crescent-shaped scythe at the enemy.

Combine is Rinoa's primary Limit Break, in which she teams up with Angelo to perform a variety of attacks. To gain access to Combine moves the player has to read Pet Pals magazines and walk/drive/ride a chocobo around with Rinoa in the party so Angelo can learn it. Not all of Angelo's skills are Limit Breaks, however; some have trigger criteria to be met during battle to summon her randomly to aid Rinoa. Learning all of Angelo's Combine skills in the Steam version earns the player the achievement Dog Trainer.

Angel Wing is Rinoa's second Limit Break obtained late in the story. While in the Angel Wing state, Rinoa's damage output is five times greater than usual, and she is in a berserk spell-casting state using only magic without expending the spells from her stock. If she has no magic, she will use physical attacks, which are again stronger than outside of Angel Wing state. By spell stock management so that Rinoa prioritizes Meteor, Angel Wing can be one of the strongest Limits in the game, rivaling the damage outputs of Squall and Zell, all without player input during it.

Despite being the character with the least combat experience, of the main party Rinoa has some of the highest base stats at Level 100, surpassing all others in Strength, Magic, and Spirit. However, the main method of stat-gain in Final Fantasy VIII is the junction system, rather than leveling up. Another good way to raise stats is via Level Up Bonus abilities that some GFs have.

Rinoa starts with physical Limit Breaks, where equipping her with GFs that have STR-J (Shiva, Ifrit, Brothers, Pandemona, Cerberus) and Str+% (Ifrit, Pandemona) may be preferable during the segments where she is in the party.

After she returns to the party late into the game, her best Limit Breaks are magical, and thus GFs with Mag-J (Quezacotl, Siren, Diablos, Carbuncle, Leviathan, Cerberus) and Mag+% (Quezacotl, Siren, Diablos) are good for her; however, at this point, the player can get almost all -J abilities to all three active party members if they have collected all available GFs, and Junction Scrolls are also available from a shop. To make Rinoa's Angel Wing more potent, she could be equipped with Auto-Haste (Cerberus) and/or Spd-J (Pandemona, Cerberus, Eden) to speed up her turns, and possibly Auto-Protect (Bahamut), Auto-Shell (Doomtrain), and/or Auto-Reflect (Carbuncle) to protect her during this state. High Vitality and Spirit also help.

The below values are the base GF compatibility values at the start of the game, which then grow or fall depending on actions taken in battle and compatibility items used. Of the six main playable characters, Rinoa has the highest base compatibility with 9 of the 16 Guardian Forces, making her an adept summoner. However, the party can almost always outdo a GF's damage over the duration of its summoning animation by simply attacking as long as they have been engaging with the junction system, making summoning an inefficient use of battle time. The compatibility mechanic is also only a minor part of the game, and could be ignored altogether.

During the battle with Adel, Rinoa is junctioned to her, immobile. If she dies, it is Game Over. The party needs to defeat Adel without hurting Rinoa.

Rinoa is a Level 10 Player Card in Triple Triad used for playing the minigame and for turning into 3 Magic Armlets with Quezacotl's Card Mod. It is won off General Caraway after losing the Ifrit card to him.

In Timber, going to the town exit before heading to the TV station triggers a scene with Rinoa defending the town guards from G-Soldiers. After completing the events in Timber, if the player speaks to a man on a railway bridge, he will give her a Potion. The event can be repeated infinitely.

If the player brings Rinoa to warn Balamb Garden of the missiles, the FMV where the party visits the second floor balcony is longer, and Squall can give Rinoa a tour of the Garden premises. During the times Rinoa is not in Squall's party while in the Garden, she will be in the library, where the player can talk to her. During the concert in Fishermans Horizon, the dialogue and outcome between Squall and Rinoa depends on the instruments the player chose for the rest of the party. If the player brings Rinoa to liberate Balamb Town, there is a unique scene in Zell's room where Rinoa marvels that Zell has a tidy room. She also contributes to Selphie's "My Friends" page, viewable after the Battle of the Gardens event on the Study Panel in the 2F classroom.