Ring Wyrm is a Rank III Mark from Final Fantasy XII. It is powerful despite its low rank. It is the seventh mark listed in the Clan Primer and becomes available after the player vanquishes the Wyvern Lord. It can be found in the Windtrace Dunes area of the Dalmasca Westersand during a sandstorm. Defeating the Ring Wyrm is an early way to get the Icebrand sword.

In the game's playable demo, Ring Wyrm is a boss fought in the Stilshrine of Miriam. It has significantly less HP than in the full game, and doesn't use any of the status-inducing attacks. It is also weak to holy rather than fire.

In the Zodiac versions, it is also fought in Stage 18 of Trial Mode where it yields equipment pieces for stealing: Bone Helm (common), Pirate Hat (uncommon) and Black Cowl (rare).

Once a legendary Wyrm, in servitude to a righteous King. But this King, fearing its violent & untameable Temperament, employed a Ring of Binding upon it, imprisoning the Creature within a howling Sandstorm. Now, many ages later, the Bonds upon it have been broken, and within the Sandstorm the Wyrm rages. The Resistance Forces training in the Dalmasca Westersand have deemed the Creature a clear Threat to their Operations and thus have issued a Bill for this Mark.

The Original Japanese Guidebook cites the Ring Wyrm's MP as being 3420, but subsequent guides list it as 999.

Ring Wyrm has high HP and will use area attacks that inflict status ailments. Once it has lost half its health, it will use Restore to gain back 30% of it. When it is in HP Critical, it will no longer use Breath or Rake. The wyrm's attacks can be blocked with shields early on, but once it has used Restore, its attacks connect regardless of shields. It can still miss under Blind status, however.

The player should buy Esuna before battling this mark because it will inflict Sap, Immobilize and Disable on the party. The battle is best opened with Dispel. If possible, a well-timed Quickening chain can be used to lower the Ring Wyrm's HP.

The party can also summon Belias, as the Ring Wyrm is weak to Fire and Espers are immune to status ailments. The player should be ready to heal Belias, or use Charge repeatedly to be able to summon him again when he uses his final attack or dies.

A good method is to focus on casting Blind on the Ring Wyrm. Once the magick hits, it is time to summon Belias. After being blinded, Ring Wyrm usually gives up on its damaging physical attacks (or will miss most of the time) and attack Belias with Blizzara, Thundara, Fira, Fire Breath and Fire Ball. Since three of these heal Belias, and Thundara and Blizzara do little damage, the player can focus on staying away from Ring Wyrm and keep Belias out the whole battle, letting the Esper do the damage. With this strategy, it is easy for even lower level players to defeat the Ring Wyrm.

To repeatedly summon Belias, one can use Charge or syphon the Ring Wyrm's MP. Alternatively, the player can place the Esper so that a cactus is between him and the Ring Wyrm. Belias can still damage the monster with Pain Flare, while the Wyrm will only attack with its weak magick spells.

Another method using the Blind with a higher than average level party is to cast Blind and use Bacchus's Wines. The party should stand just outside of Ring Wyrm's attack range (i.e. just as its health bar appears) and cast Blind on Ring Wyrm. After Ring Wyrm is blinded, the player can use Bacchus's Wines on one attacker while using two characters for healing.

The player can also use Reflect on the party to bounce the wyrm's spells back onto it; if a spell is cast on all three party members under Reflect at the same time, the spell will bounce back three times. This method can be used to beat the mark before entering the Tomb of Raithwall.

The player can also use the cacti on the desert as shields to block Ring Wyrm's ranged attacks. Equipped with a gun, a single character can run in circles around a cactus and shoot from range while being shielded from Ring Wyrm's attacks. Although this method can be used to kill Ring Wyrm relatively safely, it takes a long time to whittle down its HP with just a gun.

Ring Wyrm appears as an enemy.

Ring Wyrm appears as an enemy. 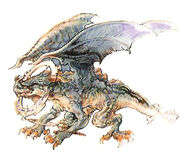 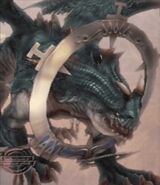 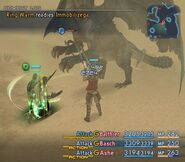 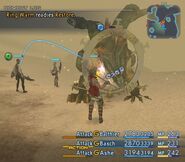 Ringworm is a fungal skin infection in humans, cattle, dogs, and other mammals. It causes a circular red, itchy, scaly rash.