Welcome to Rin's Travel Agency. Would you care to take a rest?

Rin's Travel Agency in Final Fantasy X and Final Fantasy X-2 is an Al Bhed-owned chain of establishments across Spira. They serve the same purpose as the inns from the previous Final Fantasy games, fully curing the party members of all ailments, including KO, as well as fully replenishing all HP and MP, free of charge. They also play a role in plot advancement.

The chain of agencies is owned by Rin, and feature a tutorial computer and a save point for the player to record their game data. In Final Fantasy X-2, they serve primarily as shops; they no longer offer the option to rest, and are not important to the story, unless the player decides to do some of the sidequests.

But, this is an Al Bhed shop! They don't believe in Yevon, and in Luca they... They kidnapped Yuna!

Located on the Mi'ihen Highroad, this travel agency is the first the party comes across on their travels. Despite the fiends littering the path and the difficulty of their journey, Wakka refuses to stay at the agency due to it being an Al Bhed establishment.

Wakka relents and the party rests at the agency for the night. Restless, Tidus wanders outside to find Yuna watching the sunset alone—having just recorded her will—and joins her. The two muse over the peaceful nature before Yuna reveals the objective behind the summoners' journeys: to acquire the Final Aeon at Zanarkand.

In the morning, the party fights the Chocobo Eater outside the agency. If the party is successful, Rin offers a free chocobo ride to the end of the highroad as a token of gratitude. Rin also gives Tidus the Al Bhed primer Volume VIII.

Fine, we rest. She's worse than the storm.

While crossing the Thunder Plains, the party initially bypasses this branch, but due to Rikku's fear of lightning and persistent begging, they double back and agree to take a rest. Yuna retreats to a room and Tidus follows. In a failed attempt to be sleuth, he stumbles into her room while she is watching Jyscal Guado's sphere. Before leaving after their rest, Yuna reveals to the party she intends to marry Seymour Guado.

The agency has a sign for chocobo rental, even if that service is not available here.

The blitzball free agent, Mifurey, can be recruited for the Besaid Aurochs here.

The Al Bhed primer Volume XIV can be obtained here by telling Rin "Okay" when prompted (the player must speak to Rikku, then Rin inside agency before going to Yuna's room).

At the lake north of Macalania Woods, outside of the branch, the party can speak to the Chocobo Knight, Clasko, and advise him on his next career move. Based on this advice Clasko either remains a knight or switches profession to become a chocobo breeder.

After Yuna's Eternal Calm begins, the travel agency is sold to O'aka XXIII, but after the temple sinks he finds his business dwindling and himself unable to pay his debtors.

This shop is only available before O'aka and Wantz take over the travel agency.

When the party first arrives at the Calm Lands, a hover drives over to them to sell items.

This shop only appears when the party first arrives in the Calm Lands. Once they leave the Calm Lands or enter the Monster Arena, this shop will disappear. 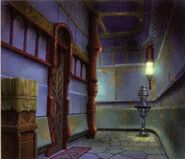 The corridor of the Thunder Plains Agency. 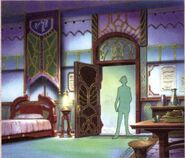 Artwork of the back of the Mi'ihen Highroad Agency. 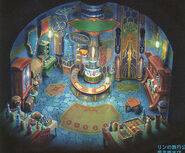 Artwork of the Thunder Plains Agency.

Shop in the Calm Lands.