An Al Bhed girl trying hard to protect Yuna. She makes up for her weak attacks with her superior speed. Her fear of lightning is just a phobia. She affectionately calls Yuna 'Yunie' as a nickname.

Rikku is a playable party member in Final Fantasy X. She is a Thief and a Chemist, able to pilfer spoils from opponents and mix items for various effects. Rikku is agile, and the fastest party member. Though briefly playable in the beginning of the game, she is last to join the party, and alongside Tidus and Wakka able to do battle underwater. Her versatility with the Mix command often leads players choosing her for an end game party member.

Rikku uses claws for weapons, and targes as armor. She can, by default, steal and use special items. Rikku can instantly kill regular machina-type fiends with the Steal command.

When counterattacking, regardless of whether the opponent is on the ground or in the air, Rikku does a spinning backhand. When countering underwater Rikku punches the fiend if they are close, but if they move faster, Rikku will perform a regular underwater attack as a counter. Rikku has two victory poses, depending on whether she is on land or underwater. On land, Rikku puts her hand on her side and points at where the defeated enemies were with her other hand in a taunting manner, then shrugs. Underwater, Rikku swings her arm around thrice before thrusting herself up.

Her Overdrive is Mix, which lets her combine two special items for various effects.

Rikku is one of only three characters in Final Fantasy X (Tidus and Wakka being the other two) who can fight underwater.

She is agile and quick and her default Strength is relatively low, though it is the highest of the three girls. She has good HP.

Rikku uses claws for weapons and targes for armor. It is never explained why Rikku uses claws rather than a machina weapon like other Al Bhed. One reason may be that she is the one who salvages machina from the deep sea, as demonstrated when she and Tidus salvaged the Fahrenheit, and machina cannot be used in those situations.

Rikku's Celestial Weapon is the Godhand.

Rikku's Sphere Grid area runs near Yuna's and Lulu's, and her Sphere Grid color is green. The unique abilities in Rikku's default position on the Sphere Grid include the following: 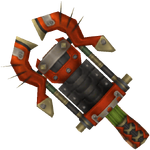 Rikku's Godhand is obtained by typing "GODHAND" as a password on the airship and going to the new location on Mushroom Rock Road. The player will appear on a narrow path. To the north is a chest containing Godhand that can only be opened when the player has acquired the Celestial Mirror.

The Mercury Crest is found in a treasure chest in a shifting sand pit in the final area of Bikanel Desert. In some versions, the Mercury Crest has switched names with the Jupiter Crest (this also applies to the sigil); but the one from the same location still affects the same weapon.

To obtain the Mercury Sigil, the player must complete the cactuar sidequest on Bikanel Island, which is available after gaining the airship. In the final area of the island is a stone engraved with a cactuar. Examining it will prompt a rhyming poem to be read and one by one, ten cactuars will appear in the desert. The player must find them, then play a game of "Red Light, Green Light" with the cactuar. If the player reaches it before they are spotted they battle the cactuar. Win or lose the minigame (not the battle), they receive a sphere to be taken back the stone, at which point the next cactuar can be found.

The ten cactuars can be found in the following locations:

The Godhand deals more damage the closer Rikku is to max HP.

The following table lists the abilities the Godhand will have after the appropriate upgrade is used.

Notable optional scenes with Rikku include a scene in Guadosalam where Tidus has a chance to talk with Rikku about Yuna getting married, and even say he'd prefer Rikku when she suggested Tidus loves Yuna. If Rikku has the highest affection with Tidus, she will also ride with him on the machina sled to Macalania Temple while talking of the sacrifice summoners must make to defeat Sin.