Rikku is a playable party member in Final Fantasy X-2. Her default dressphere is the Thief, though she performs equally well in any dressphere. As an Al Bhed, Rikku is associated with machinery, and her special dressphere is Machina Maw.

A possessed Rikku is fought as a boss in the Den of Woe by Yuna.

A girl troubled by Vegnagun, but even more troubled by Yuna's reaction to this new menace. Is Yuna prepared once again to give her life for Spira? Rikku would not approve.

Rikku specializes in elemental, physical, and magical attacks. She has a different victory pose depending on her equipped dressphere.

The party members all have different EXP totals and therefore progress at different rates. Rikku's level growth is at first the fastest, but later becomes the most moderate, requiring 1,249,480 EXP for level 99 compared with 1,350,322 for Yuna and 1,169,767 for Paine.

All of her other stats depend on which dressphere she has equipped, and thus her stats can even be altered on-the-fly amid battle. The only equipment pieces are accessories, which are not character specific.

Party members' stats are determined by the dressphere they equip, and only a few dresspheres have unique stat growth for each party member: Trainer and Mascot, and the Special Dresspheres. Rikku thus performs equally well as Yuna and Paine in any dressphere, but has a unique attire and battle lines. 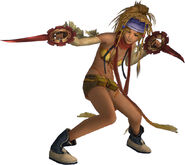 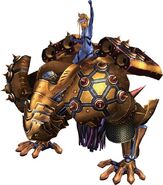 A possessed Rikku is fought in the Den of Woe by Yuna.

For Rikku to become a potential suspect in the Mi'ihen Highroad mystery, which is the event for Chapter 5, the player must complete the mission "Cuckoo for Chocobos" in Chapter 2. During the mission the Gullwings must capture the chocobo at the South End of the Mi'ihen Highroad. Rikku will drop down from the ruin and land on a sentry machina. As the machina were being synchronized, this would later cause the machina to malfunction. Capturing the chocobo before reaching the South End will prevent this event from taking place, meaning Rikku cannot be held responsible.

In the same mission, if the player reaches the Chocobo Eater before the allotted time is up, Rikku will run across the bridge on the Newroad after the battle. A hover moving in the opposite direction tries to avoid her but falls into the ravine.

The player can place Rikku into blame further during the Chapter 3 mission "Machina Mayhem". If the player jumps down the cliffside from the Newroad to battle the rogue machina, Rikku will leave her footprints behind, which will later be matched with the footprint imprinted on the machina's head back at the ruins. Jumping up from the Oldroad to battle the machina will not leave footprints.

After Rin concludes Rikku is responsible he decides her punishment is to pick up litter on the Highroad. Rin later purchases chocobos for travelers to ride on and leaves a trail of feathers much to Rikku's exasperation.