The Wind-up Rikku minion was an in-game reward for the attenders of Final Fantasy XIV Fan Festival 2016 in Las Vegas.

Rikku appears as a recruitable character. She is of the Visitor race and has Thief as her main job. Her attack is Pilfer HP.

Rikku makes a cameo as a tutor from the in-game manuals. Along with Wakka she explains how to use the shop system. She uses her Final Fantasy X portrait.

This Al Bhed girl formed the Gullwings together with her brother. While the spheres they hunt may reveal a frightening past, Rikku does not avert her eyes from the truth, striding forward and bringing hope to Paine and Yuna despite all. 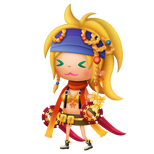 Rikku appears as a playable character. Her initial weapon is the Blind Dagger.

Rikku appears as an illustration.

Rikku appears as an ally and a summonable Legend. She is depicted in both of her Final Fantasy X and Final Fantasy X-2 outfits and her Kingdom Hearts II outfit.

Rikku is a playable character who could be recruited during the Challenge Event Defying Fate as the First Time Reward for completing the event's Dome - The Beyond stage on Classic difficulty. She has also appeared in Eternal Calm as well as Go Go Gullwings!. 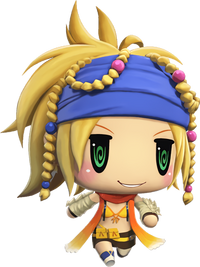 Marine Treasure Hunter
After learning how to breathe underwater (patent pending), Rikku realized her time was best spent scouring the sea for awesome trejjies. She boasts that she can hold her breath for up to an entire day. (Aha! So apparently it's not forever.)

In Grymoire, she still hasn't met Yuna or Tidus. But if she ever does, they're guaranteed to get along!

Gullwings Wanted!
Rikku is looking to make a career out of treasure hunting, and has started recruiting members for her team, which she's calling "the Gullwings."

Rikku bumped into Yuna on a recent excursion and immediately took a liking to her. Now, if she can just find a way to get Yuna to join up...

Trejjie-Wejjie, La La La La La!
Rikku and Bartz seemed to really hit it off, didn't they? Their combined optimism and contagious spirit of adventure must have created some sort of perpetual energy loop that charged their fun meters to the max. Even Ifrit couldn't help but get bowled over.

(Although, Bartz did seem a little more self-aware than Rikku. Maybe he was just playing along?)

Rikku appears represented by Wind-elemental cards. She is depicted in her promotional poster art and official artwork from both Final Fantasy X and Final Fantasy X-2, as well as her renders from the latter, and her Theatrhythm Final Fantasy Curtain Call artwork.

Rikku was originally going to be featured in Kingdom Hearts at Traverse Town along with Aerith, Leon and Cid but due to the similarities in her name and a new main character named Riku, Yuffie took her place. As such, Yuffie's appearance has some leftover elements from Rikku's design.

Rikku appears in Kingdom Hearts II alongside her fellow Gullwings Yuna and Paine wearing a slightly modified version of her Final Fantasy X-2 costume. The Gullwings are diminutive in stature and depicted as pixies. Rikku, Yuna and Paine are allied with Maleficent and spy on Sora, but are not loyal to her; Rikku calls her "pret-ty lame", and they seem out of the loop regarding her plans.

After Donald mentions Leon has treasure, the Gullwings change sides and help Leon defend Hollow Bastion. They later confront Sora and company in his lie, but having been told of his battle with Organization XIII, they let it slide and give him the Gullwing Keychain for his Keyblade. They do not seem to be as powerful as they are in Final Fantasy X-2, as it takes all three of them to defeat one Heartless that would otherwise be easily defeated by Sora.

Rikku makes an appearance in Kingdom Hearts χ [chi] as one of the obtainable character cards. She appears in the remake, Kingdom Hearts Union χ[Cross], on several medals.

Rikku appears in Dragon Quest & Final Fantasy in Itadaki Street Special, in her Final Fantasy X-2 attire, as a playable character alongside Yuna and Paine.