Satisfied? Reddas? We'd be lucky if we earned a "not disappointed" from him! But I suppose everything depends on us now.

Rikken is a non-player character in Final Fantasy XII and Final Fantasy XII: Revenant Wings. A member of Reddas's crew, along with Elza and Raz, he is loyal to his leader, and considers himself one of the fastest people in Ivalice, challenging Vaan to a footrace.

Rikken has long, dark, messy hair and a goatee covering his chin. His right eye is covered by a beige bandage, with a strip running across the bridge of his nose. In Final Fantasy XII, his outfit consists of bandages wrapped around his upper chest and arms with no shirt. He has a broken chain around his left wrist and a small black bow around his neck. He wears baggy blue breeches with yellow codpiece; and grey boots. He has blue swirl-like tattoos on each shoulder.

In Revenant Wings, he adds a brown baggy long-sleeved shirt, ripped at the shoulders to expose more bandages and patterned at the cuffs; brown and black gloves; two black belts and two brown belts.

The cheerful optimist of his group, Rikken is never seen without his companions Elza and Raz. He has been known to silence suspicious Elza, and, like his companions, respects Reddas highly, calling him "Lord".

The party first encounter Rikken at Balfonheim Port, after talking to Reddas. He is Reddas's right-hand man, and provides the party with information on how to get to the Feywood. When Elza is concerned about Rikken giving directions to outsiders, Rikken shuts her up by asking if she would complain to Reddas.

When the party return from the Pharos, Rikken has a hard time believing Reddas is dead, but comes to accept it. He later tells the party the Sky Fortress Bahamut is closing in on Rabanastre.

Ah, thanks for the help! But don't be expecting a show of gratitude!

Rikken, after his rescue

Then what was that?

Rikken and his gang meet up with Vaan and company at Port Marilith, the calling town of the Muruc Cahuac Skysea. Rumors of the treasures on the skysea's many islands have reached may sky pirates' ears, and Rikken, Elza, and Raz are no exception.

They have organized an auracite hunting tournament, and the entry fee is one hundred thousand gil per head. Vaan bypasses the fee and asks Rikken if he has heard anything about the Judge of Wings. Rikken suggests he might know something, but will not tell the party unless they win the tournament. Filo "bargains" with Rikken so the party can enter the tournament for free, and the scavenging hunt begins.

Rikken's treasure hunting at Isshu, Jewel of the Skysea is interrupted by a rouge band of Yarhi-summoning sky pirates. The party comes along to offer help, but the trio declines assistance, thinking Vaan will try to steal the island's treasures. Later, Rikken, Elza, and Raz get into more trouble with sky pirates at Cebe, Isle of Treasures.

This time, they grudgingly accept help from Vaan and friends, who ask for repayment in the form of info on the Judge of Wings. Rikken knew nothing all along, and he and his comrades race off to do more scavenging, leaving Vaan to rely on Tomaj for sources of information.

Rikken appears later in the Yapih Caverns and helps rescue Filo from Ba'Gamnan and his gang. Rikken's airship narrowly escapes the destruction of the skysea, but crash-lands of Tswarra, Isle of the Lost. The party can later engage him and his crew in a friendly optional battle at the Zwaua Rainwood.

Vaan can challenge Rikken and his gang to a footrace minigame outside of Reddas Mansion. The minigame consists of 100 levels that reward the party with treasures, including the rare loot Slime Oil. Of the three competitors, Rikken is normally in the lead, and travels at about the same speed as Vaan.

Pylraster is a Mark whose hunt becomes available after the events in the Pharos. The hunt is petitioned by Rikken, but he is not sure where to find it. The player can find the Pylraster at the entrance to the Pharos in the section They Who Thirst Not. The player can use the Gate Crystal at the First Ascent, and go outside to find the Mark.

Rikken is fought alongside Elza and six pirates on Stage 86 of Trial Mode in the Zodiac versions. This is considered one of the harder stages of the gauntlet. 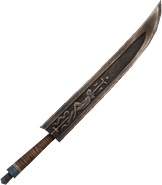